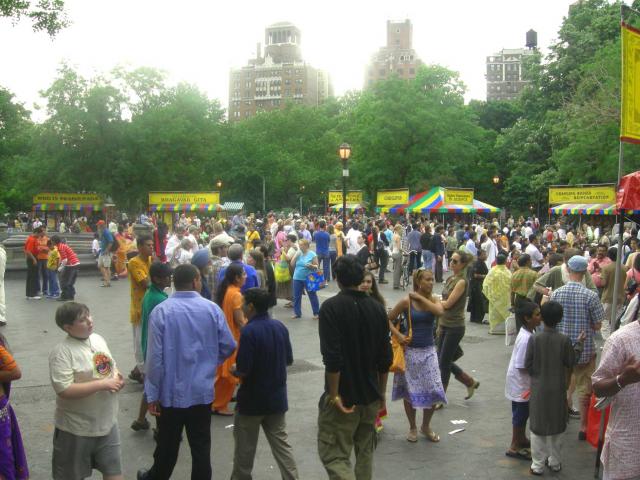 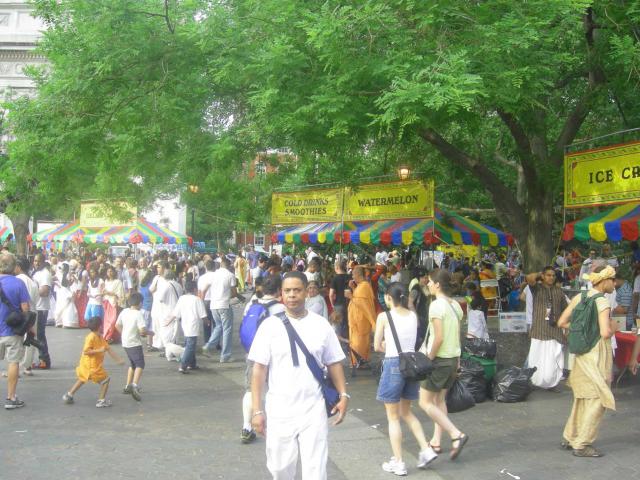 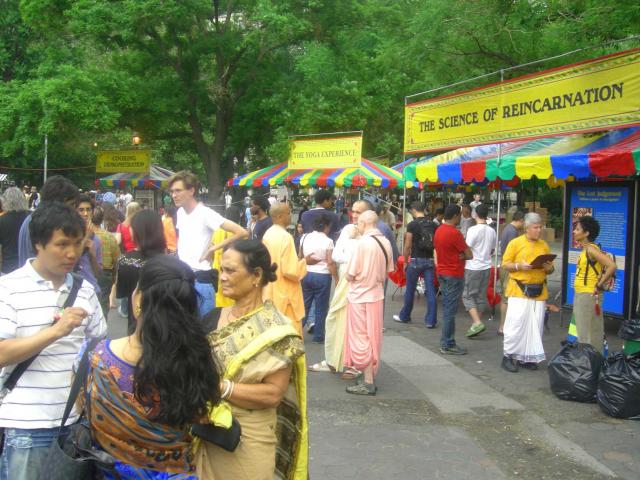 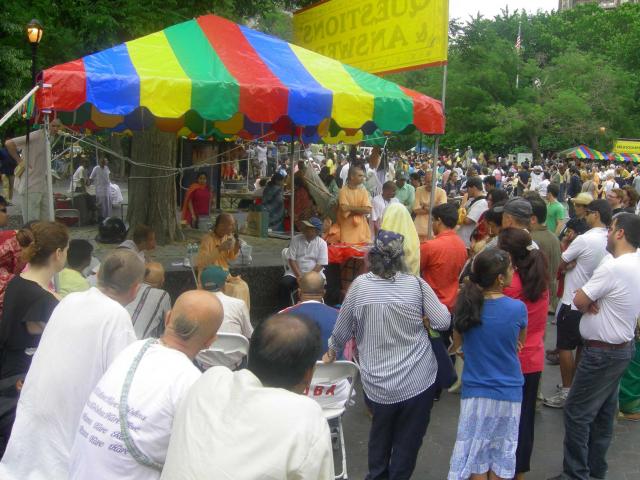 Arriving just in time for the Brooklyn temple Sunday Feast serve out, the Festival of India crew camped at the doorstep of the Sri Sri Radha-Govinda Mandir. Throughout the weeklong stay, FOIâ€™s willing helpers assisted in preparations for the Saturday extravaganza- Ratha-yatra on 5th Avenue and Festival of India in Washington Square Park. On Wednesday evening, the Festival of India Players presented dramatic entertainment in the form of â€œDhrtarastra Quits Homeâ€- a play based on the thirteenth chapter of the First Canto of Srimad Bhagavatam.

The Schermerhorn Street temple buzzed with activities related to the free feast for thousands. With the advice and approval of Mother Satya and Ramabhadra prabhus and
the final arrangements conducted by His Holiness Romapada Swami, we were set to go.

The order of the day on Friday was rest, but in the noisy city streets and the heat of late spring, the option was difficult at best. Despite the challenge at midnight the crew and equipment and a few eager helpers found their way to Washington Square Park for the all night marathon and by dawn, nearly all was done. The routine rest from efforts in preparation for more filled the morning hours. Most of the crew members reappeared at Central Park South. The hug fully decorated chariots of their Lordships Jagannatha, Baladeva, and Lady Subhadra seemed to float their way down 5th Avenue on a river of ecstatic kirtan and blissful devotional enthusiasm.

How a metropolitan city street becomes so purified by the glances of the Supreme Personality of Godhead is a miracle in itself, but beyond that aspect lay the event in honor of their procession. There is no end to Krsnaâ€™s pastimes, so similarly, the parade simply served to attract and deliver innumerable souls into another chapter. The circle of activities in Washington Square Park severed to please everyone. Presentations on Reincarnation including projections and personal opportunities, two q&a booths, science centers, book markets, cooking demos, â€œMANTRA YOGAâ€ experiences, what to speak of act after of stage entertainment, but the free feast attracted countless numbers. The free feast serving area located just outside the fountain circle had lines extending to the edge of the park. Such a gathering of saintly persons is rarely witnessed, especially in the heart of Manhattan.

It was wonderment beyond imaginings. By nightfall, the park emptied of Festival of India equipment; it was being thoroughly swept as the snake charmer sculpture was hoisted into the back of the FOI truck. The doors closed, the engine roared, and FOI was gone back to Brooklyn for rest and refreshment. The next day, Sunday- a knockout breakfast set the pace for a knockout feast which was preceded by the New Vaikuntha Playersâ€™ (NYCâ€™s own devotional drama troupe) depiction of the story of Lord Ramacandra.

We stayed for Ekadasi breakfast on Monday and managed to maneuver our way to South Carolina that day- the day of Lord Hari- we were headed for the 2007 Alachua Mela.