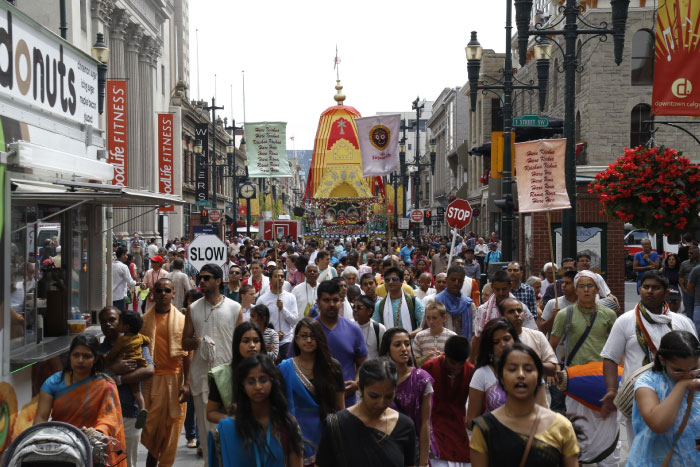 Text submitted by Krishna Caitanya Prabhu from Vancouver, and Nrsingha Prabhu from New Talavan, Photos from Prahlada....
After a 29 plus hour drive from Thunder Bay Ontario, we arrived in Calgary. We were met with sumptuous Krishna prasad already prepared by the devotees of Calgary—Thank you Calgary, Hare Krishna! After resting for about four and a half hours, we awoke ready to set up another festival for Lord Jagannath. Our crew performed a full 14 hours of doing service: setting up tent frames, strapping the multi-colored FOI tent tops onto the frames, the setting the tents in the rightful positions, putting stakes in the Earth and giving out water-melon and banana Krishna-prasadam to random people walking by.

Above is the Boy's Trip on stage cooking it up with an ecstatic kirtan. Hare Krishna!

Some locals asked about the festival and most importantly others took prasad given by the wonderful Krishna devotees of the Calgary congregation and temple. 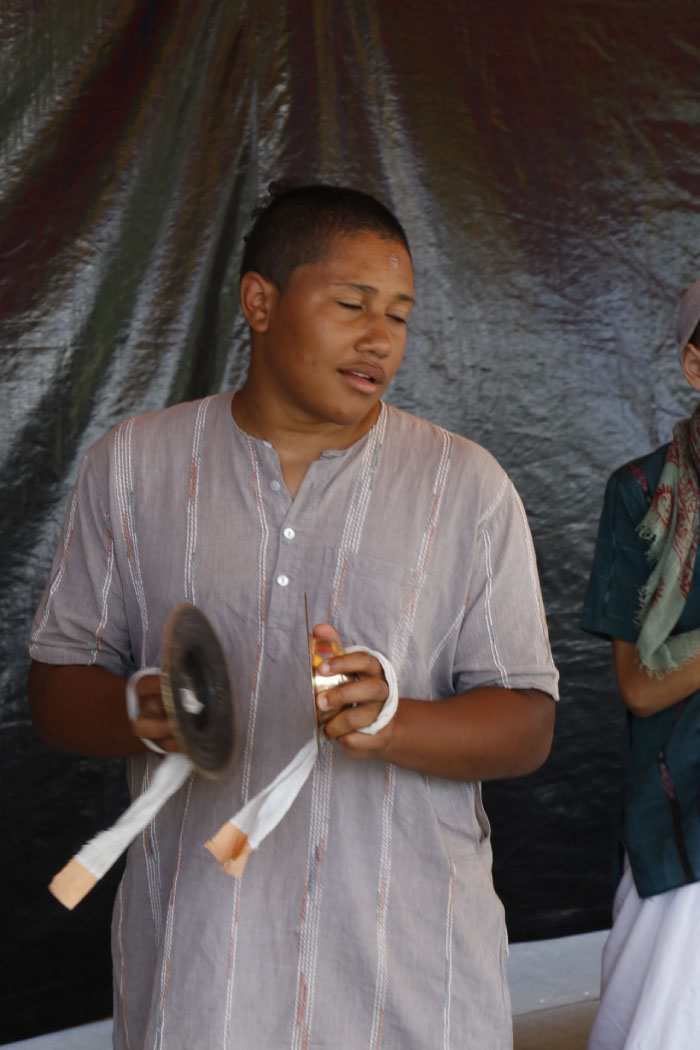 Mathuranatha is traveling on the Hare Krishna Youth Ministry Boy's Trip this summer. 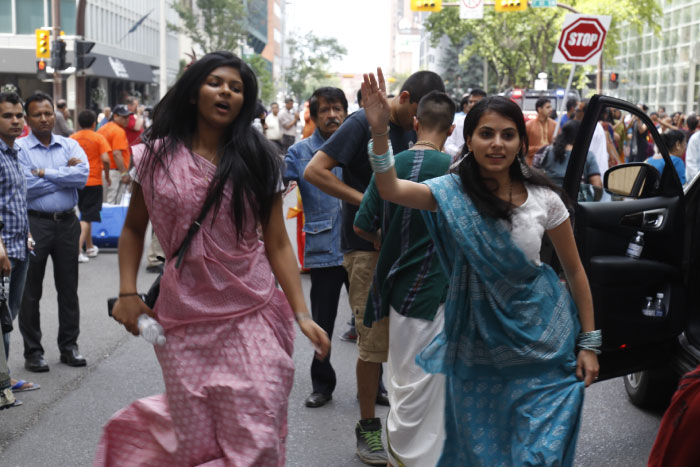 So many devotees, and everyone else as well, were all dancing in the kirtan.

After waking up the next morning, breathing in the fresh cool Canadian air, came another beautiful day for Lord Jagannath to take a stroll through the city, and witness the Boy’s Summer trip - holding 30 strong little men, Calgary's locals, Festival of India and all the other guests who came to witness the 5,000 year old Festival of the Chariots—Ratha-yatra.

From left to right--Nitai Chandra Prabhu from Australia on the FOI 2014 Tour; Markendeya Prabhu-an FOI veteran from 2013 and long time participant/ organizer of the Boy's Trip; and Madhuha dasa. 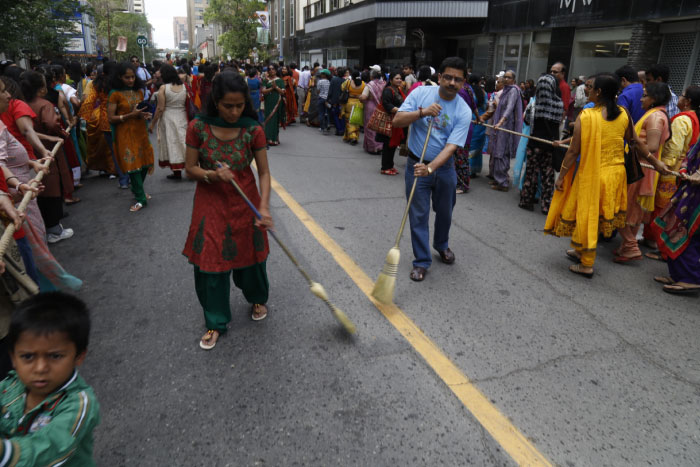 Yes, even in Calgary, the devotees swept the street before the chariot rolled! Hare Krishna.

The weather was generally favorable for the most part, but with Jagannath's mercy, fortunately the rain only came when we were under cover by the buildings over-passes in downtown. Festival of India Tour - North America 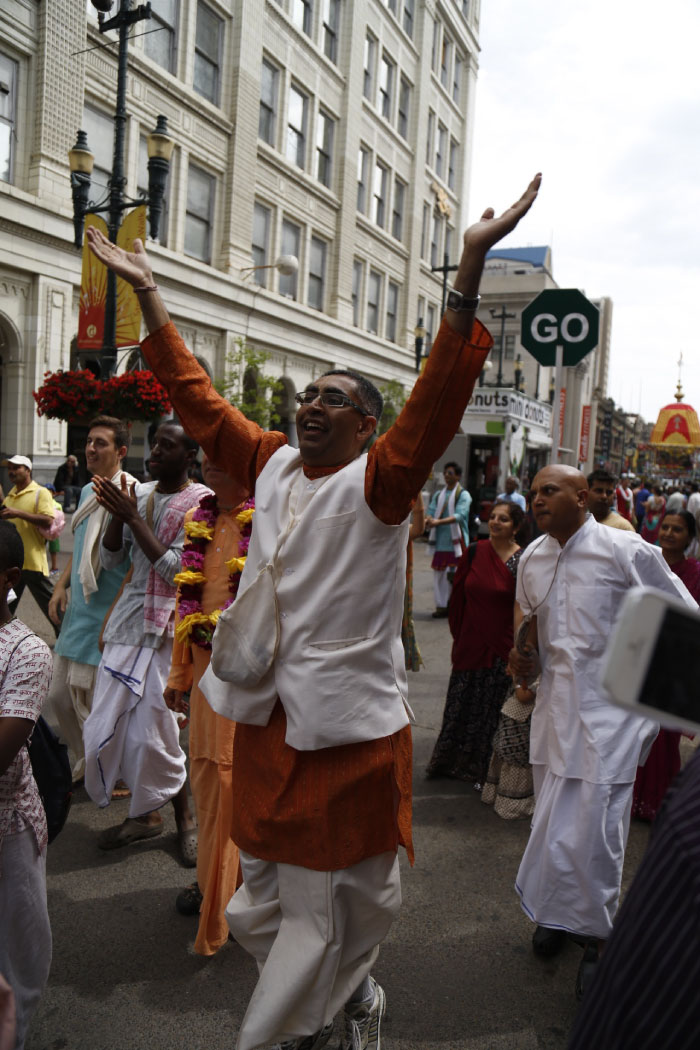 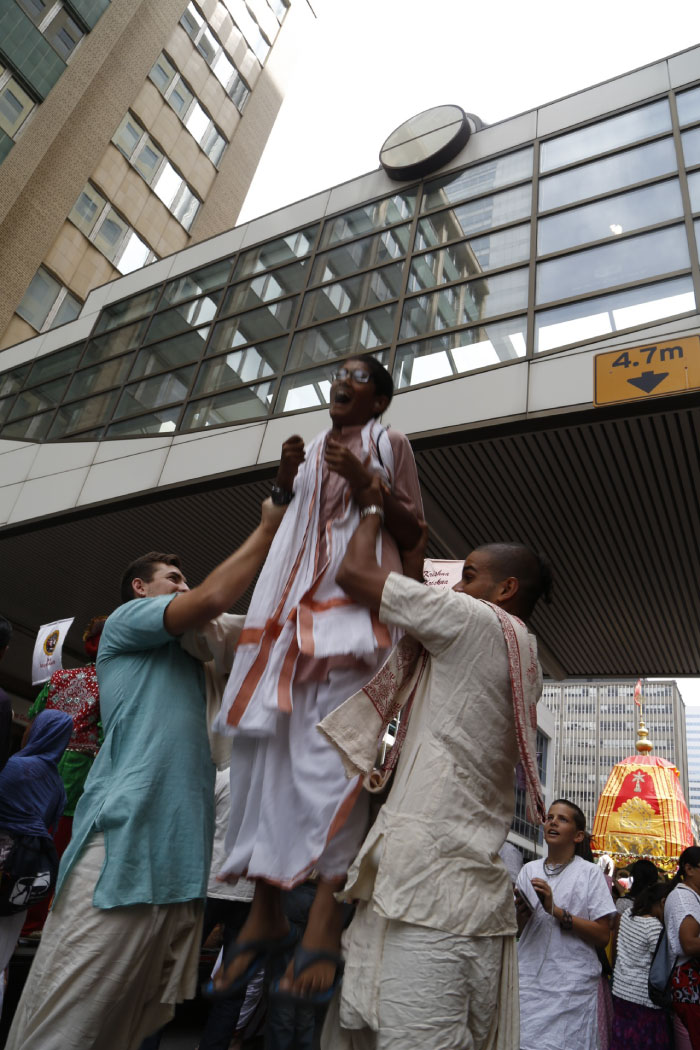 Many ecstatic kirtan leaders lead with harmonium in hand, kartal players, mridangas, all of this could be heard for many blocks and finally a dholak drum, helped the fire stay alive in the transcendental Ratha-yatra procession that went down 8th Ave all the way to Shaw Millennium park, where the Hare Krishna Festival of India was fully set-up. Coming close to the park, Krishna Kishor Murlidhar and Ananta Prabhus from the Hare Krishna Youth Ministry’s “Boy’s Trip”, inspired everyone to continuously clap and dance in order to keep Sri Jagannath smiling. The kirtan got so intense that the devotees in charge had to keep the dancers away from the sound that would otherwise drift from everyone’s ears. At the festival site, the chairs quickly filled and the people were ready to watch the devotees dance, sing and perform many other presentations. The last few performances to get the crowd going, was a wonderful reenactment of the Ramayan and than a raging kirtan which made the crowd stand up for a full hour. 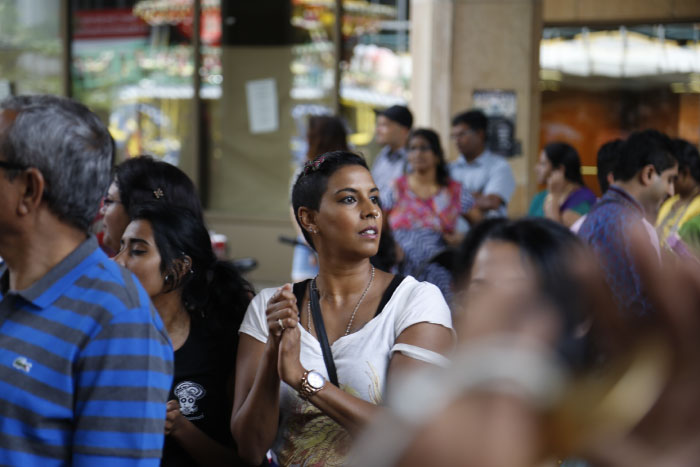 As the RY parades rolled down 8th avenue, people on the streets looked on in amazement, awe, and many jumped in and started dancing with the devotees. 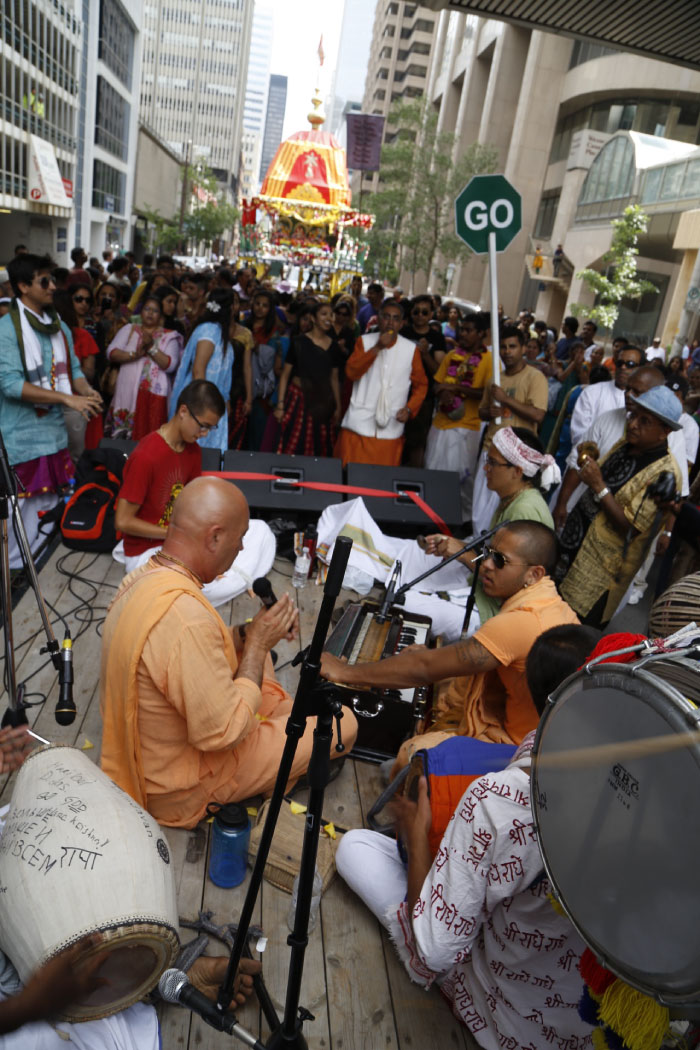 The kirtan was easily heard for blocks, there was great amplification on the trailer, pictured above. 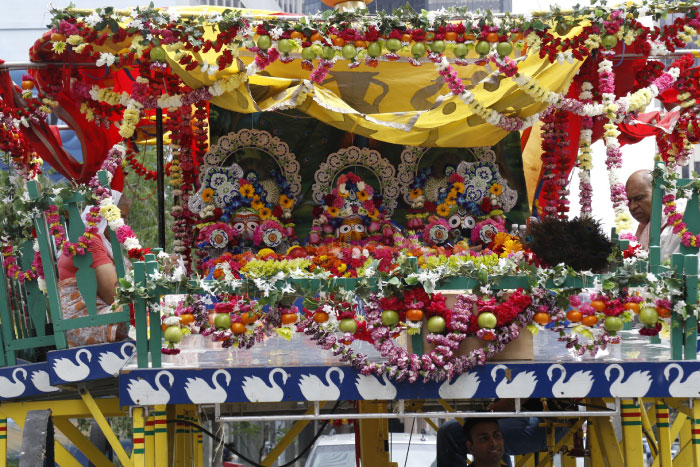 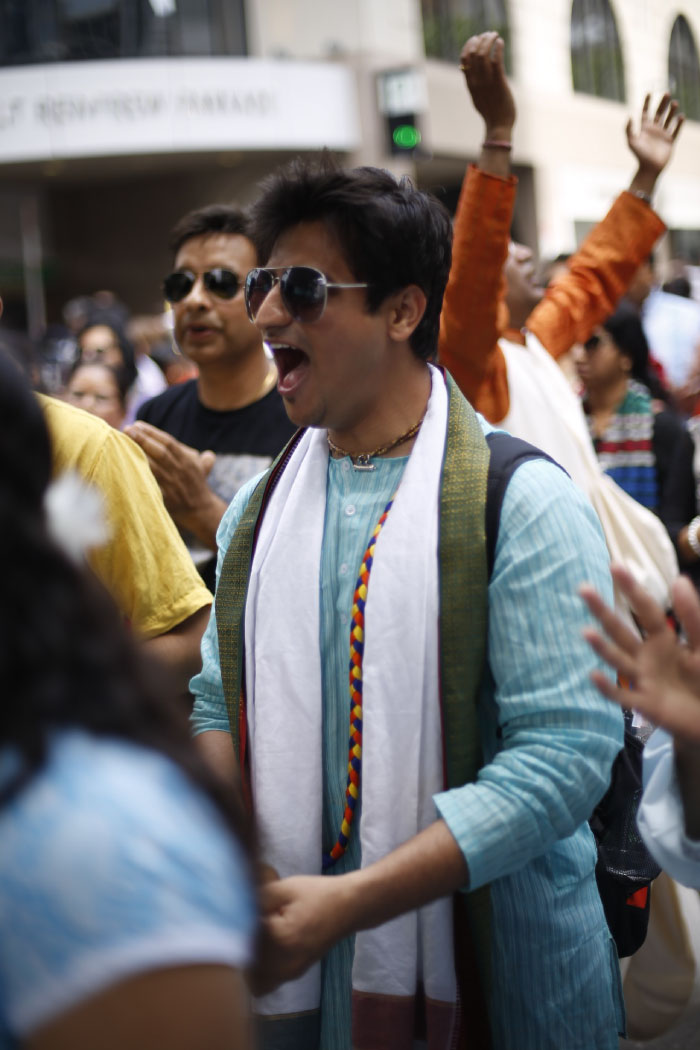 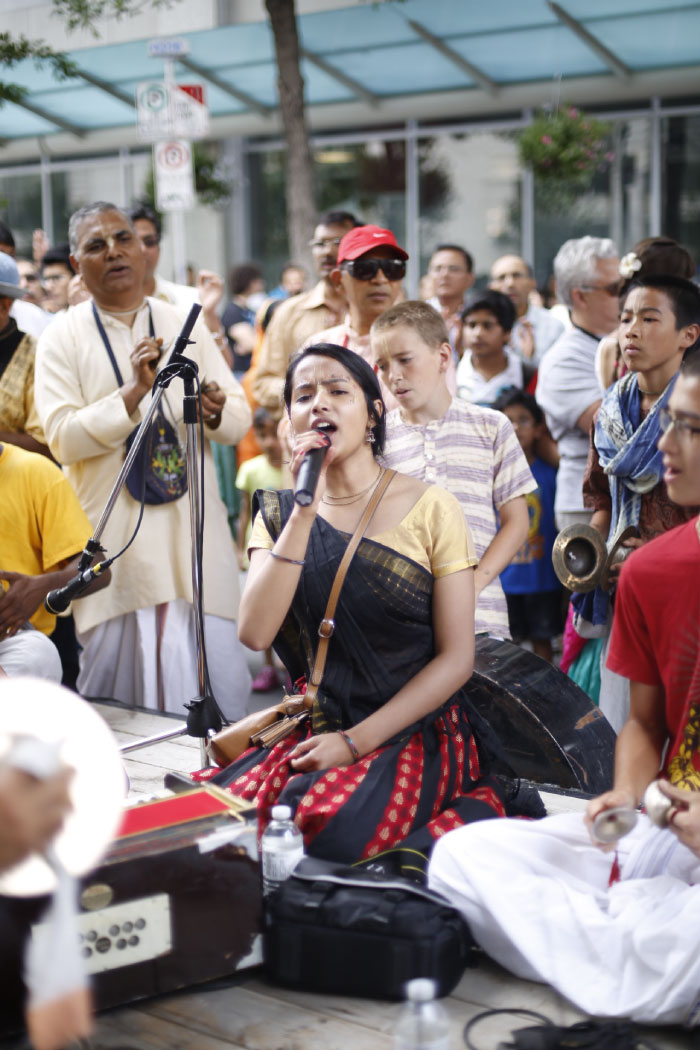 Prasannatma Prabhu and his wife spent the day in the "Books on Yoga and Meditation" booth introducing many people to Srila Prabhupada through his books. They distributed many small books as well as Hard-cover Bhagavad-gitas. Srila Prabhupada's transcendental Book distribution ki Jaya! 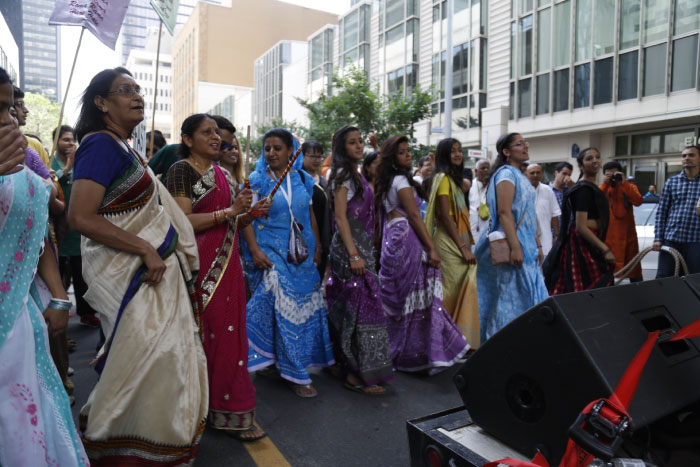 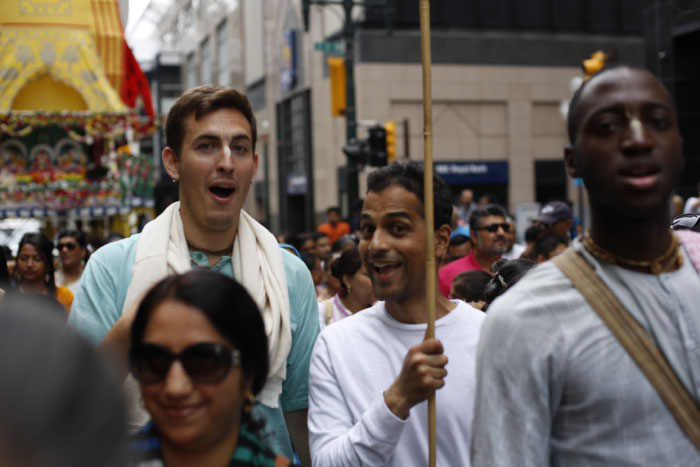 Due to wonderful organization of the festival, the prasad turned out really nice, there was Nan, beans, rice, lentils, halva, mango nectar, and ice cream which made people come back for seconds & thirds. Sri Krishna Pasadam Ki Jaya!. 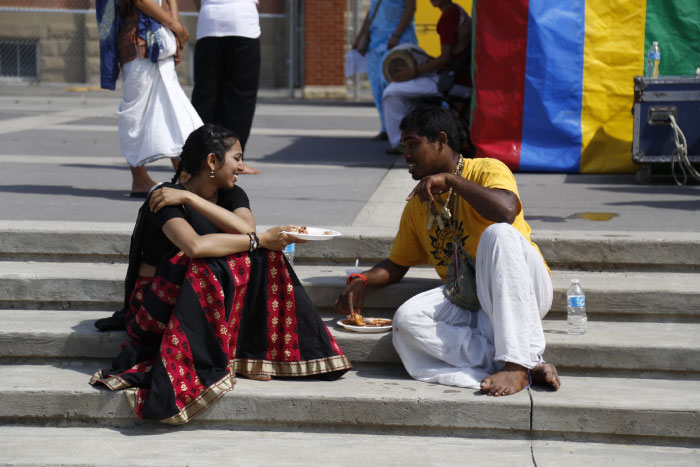 The prasad was so nice that the donation box was filled with cash from people who were willingly giving in full appreciation. Roughly around 5:30 pm the FOI crew got together and started bringing all the exhibits back to the truck, which was a good 500 feet walk back and forth. Soon after, different devotees got inspired to help out and the breakdown finished much faster than expected. After a fast and efficient breakdown, the devotees took a break laughing, playing soccer and rejoicing on how wonderful the festival was. The FOI crew went back to the temple--Sri Sri Radha Madhava Mandir to help unload two fully loaded giant box trucks--putting away the stoves, gift shop items, cement blocks, matts and all the other festival paraphanalia, so it could be easily found next year round. But the fun did not end there. 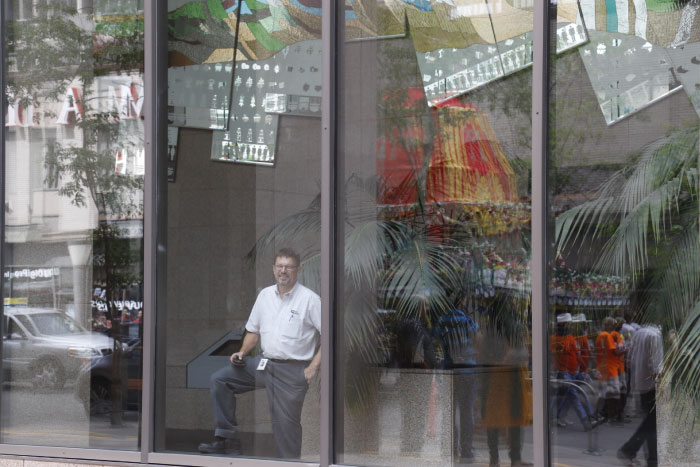 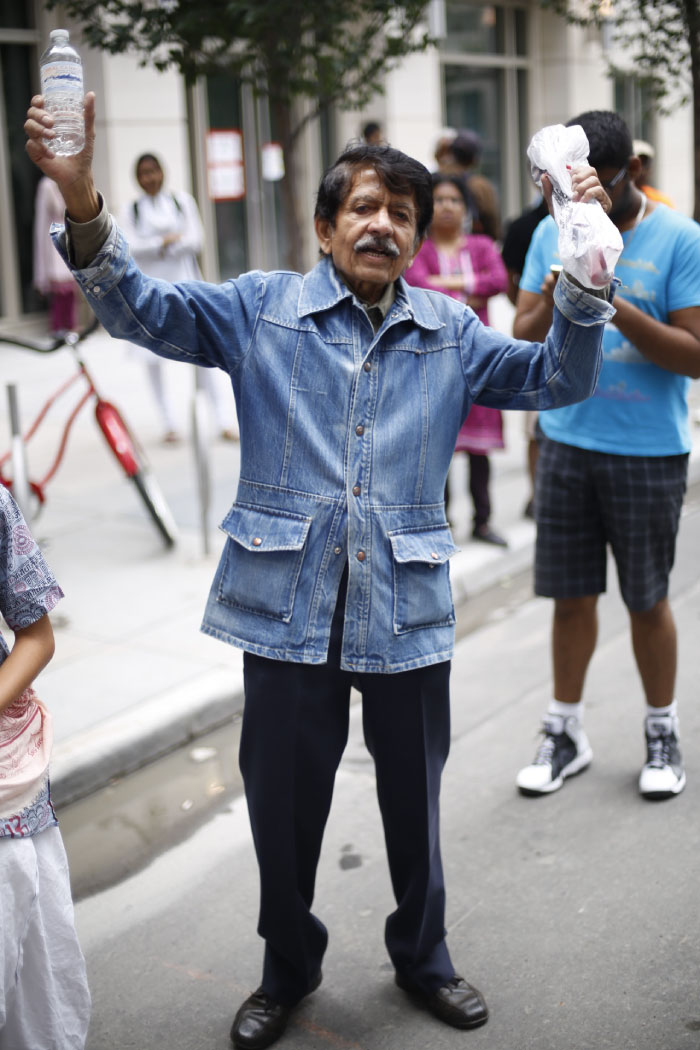 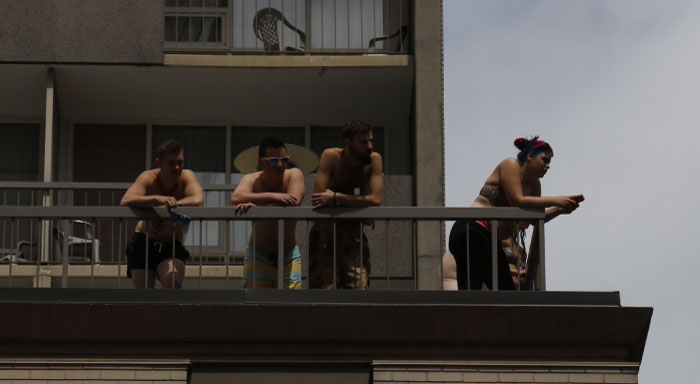 After a nice Mangal arthi lead by none other than Madhuha prabhu, we helped out in the kitchen by cutting fruit for the army of devotees who were to fire up the Sunday feast later. Soon after breakfast, the local devotees started rolling in to come help cook the Sunday feast for the hundreds of anticipated guests. It was so inspiring to see young people in this day and age that come to terms with the meaning of life. There was a nice kirtan done by the Boys Tour that went on for about an hour, and again, it kept everyone dancing. The FOI devotees would like to thank Sahadev Prabhu, his family, and all the residents of the Calgary Temple, and their first class congregation, for their sincere hospitality and also the Calgary Police for keeping all of the participants in the parade safe and sound. Hare Krishna—we’re off to Edmonton….