Festival of India Returns to Toronto

Text submitted by Phani Bhusan Prabhu, Photos from Nitai-Chandra Prabhu and Prahlada Prabhu
Centre Island/Toronto, Ontario Festival Of India....
Arriving in Toronto, the all out efforts of Festival of India began Tuesday, Ekadasi day just after a quick stop and New Remuna dhama temple on Avenue Road between Roxborough and Macpherson.

Friday before Ratha-yatra, the temple conducted an ever increasing in-house 12 hour Hare Krishna kirtan. For the FOI crew, it was a must to attend and participate.

Parade on Saturday which hosts 3 fully decorated chariots and a crowd of swelling into the tens of thousands from all over the world. A procession sweeps through Yonge Street and through the minds of countless bystanders. 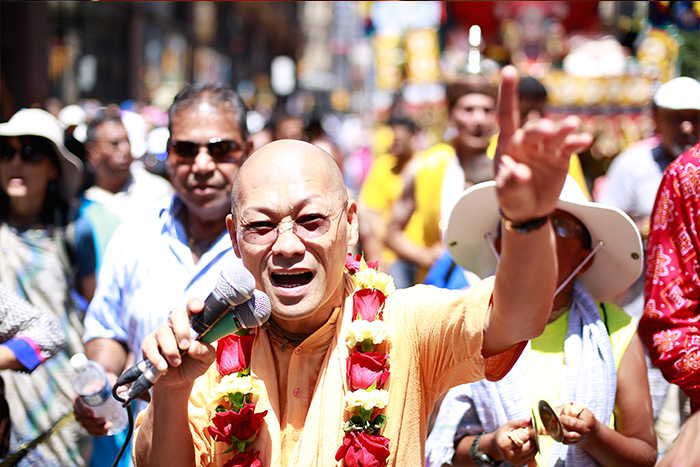 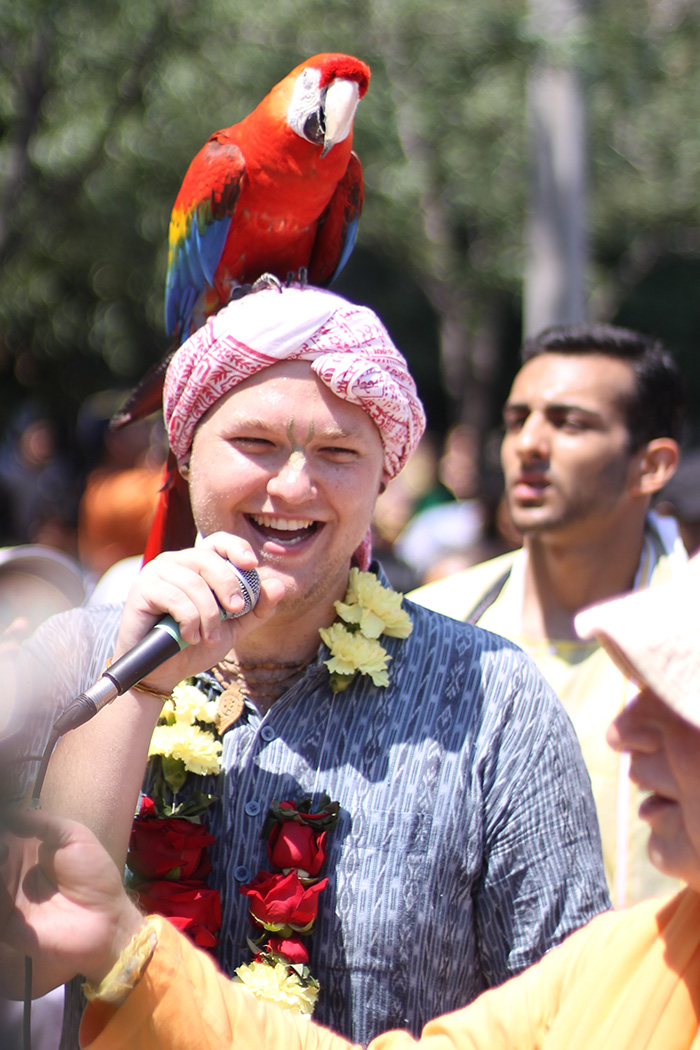 Prahlada Prabhu getting photos for the world-famous Festival of India Blog and facebook page, being carried by Govinda Prabhu from PV. 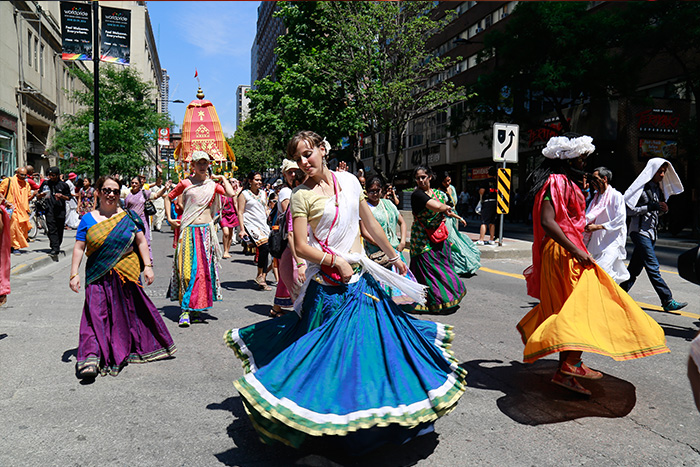 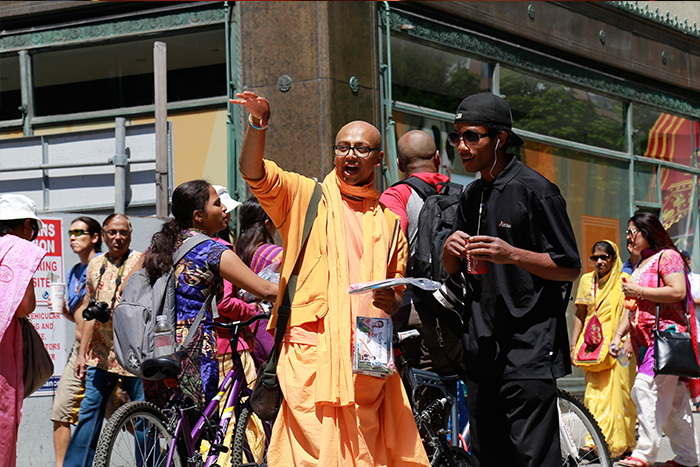 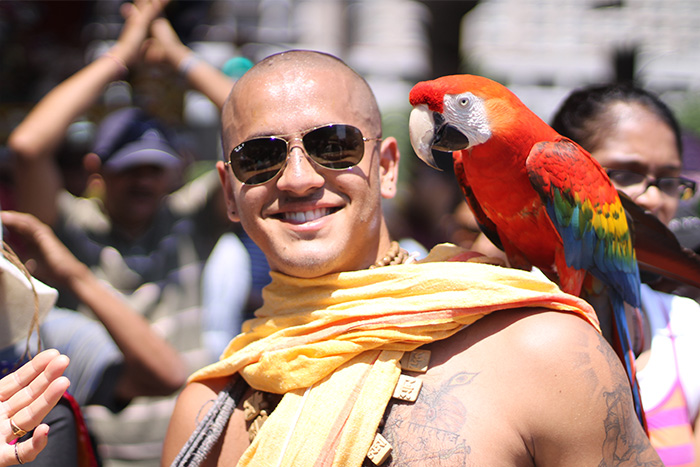 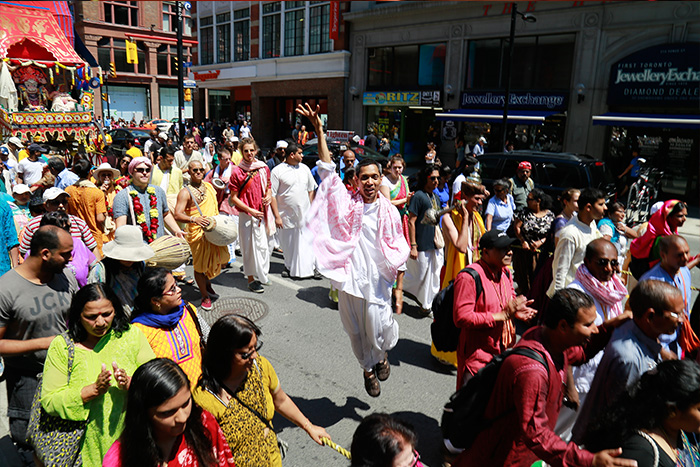 Everyone was dancing in the parade. Hare Krishna. 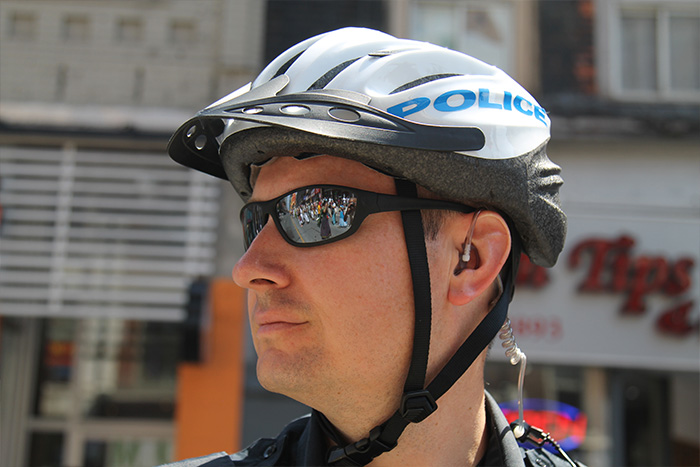 One of Toronto's Police officers assigned to the Ratha-yatra parade looks on in amazement at the devotees loudly chanting Hare Krishna and the totally awesome Chariots carrying Lord Jagannatha; Lady Subhadra and Lord Baladev. 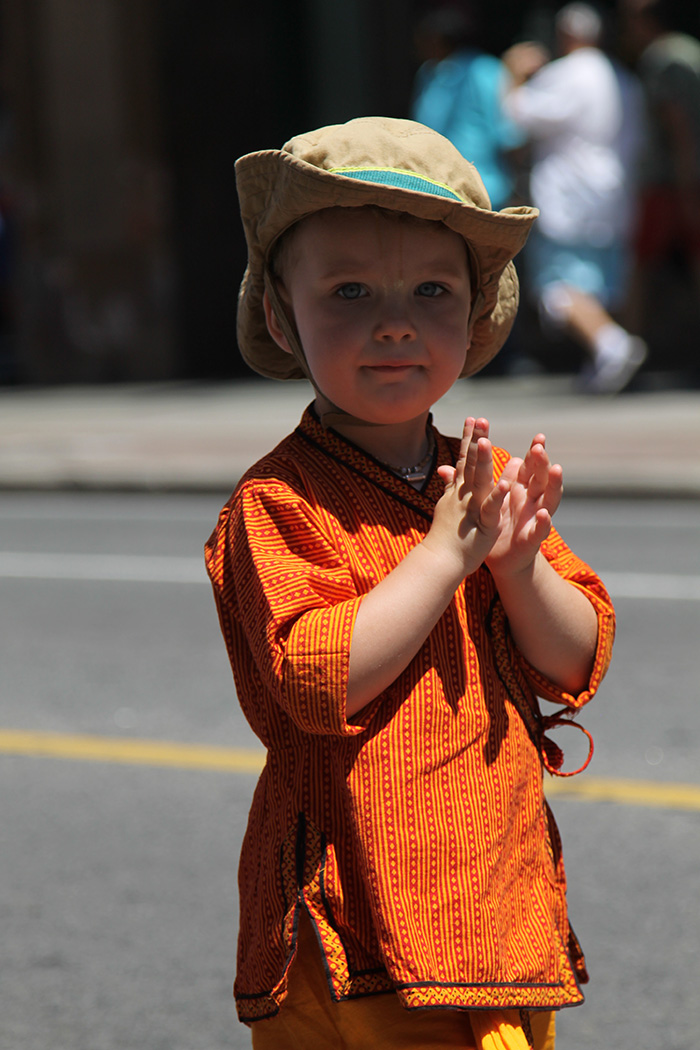 Great stalwart devotees from all over the universe were in the Ry parade on Yonge Street.

In large clear letters announcing the Centre Island continuation, invite everyone to come along. After packed ferry boat rides to the island dock side, a few paces bring into view the renowned multi-colored striped tent-tops that state: Festival of India is present. 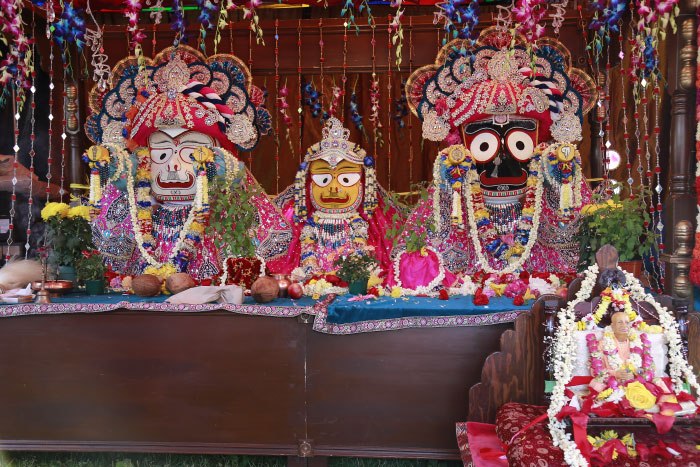 Lord Jagannaha; Lady Subhadra; Lord Baladev and Srila Prabhupada on Their Altar in the Festival of India site on Centre Island. 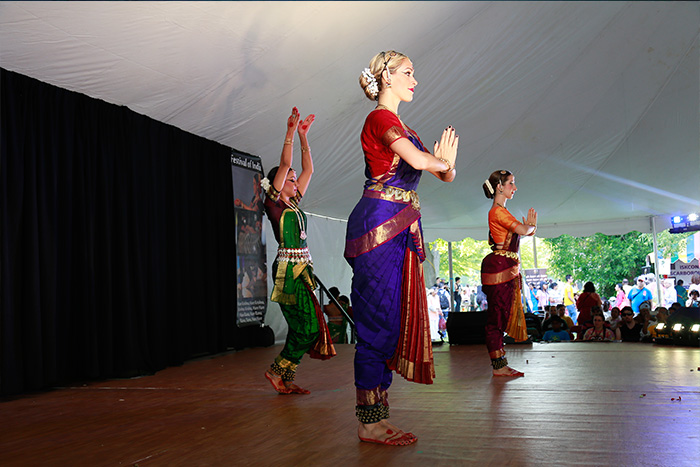 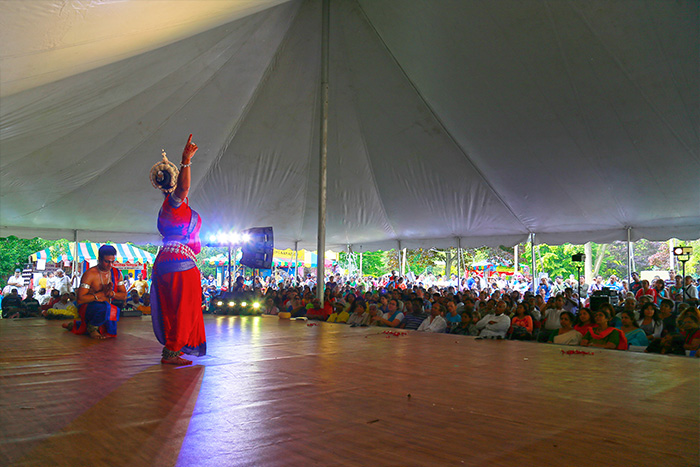 More Dancing at the festival... 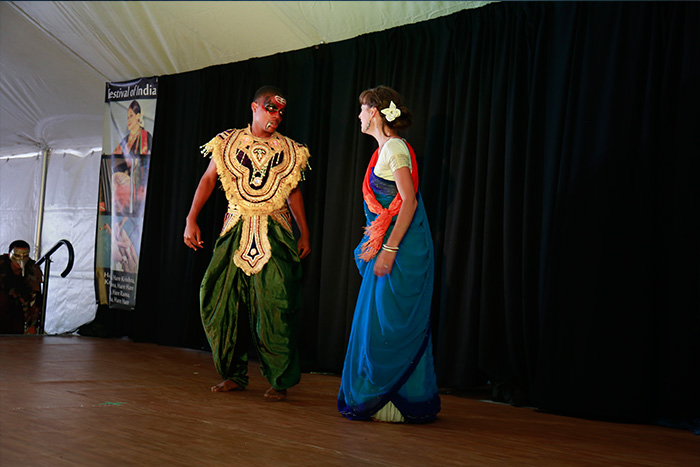 The Hare Krishna Youth Ministry "The Boy's Trip" performs an inspiring drama on the main stage at the festival.

So many different people from all over the world were there. Hare Krishna. 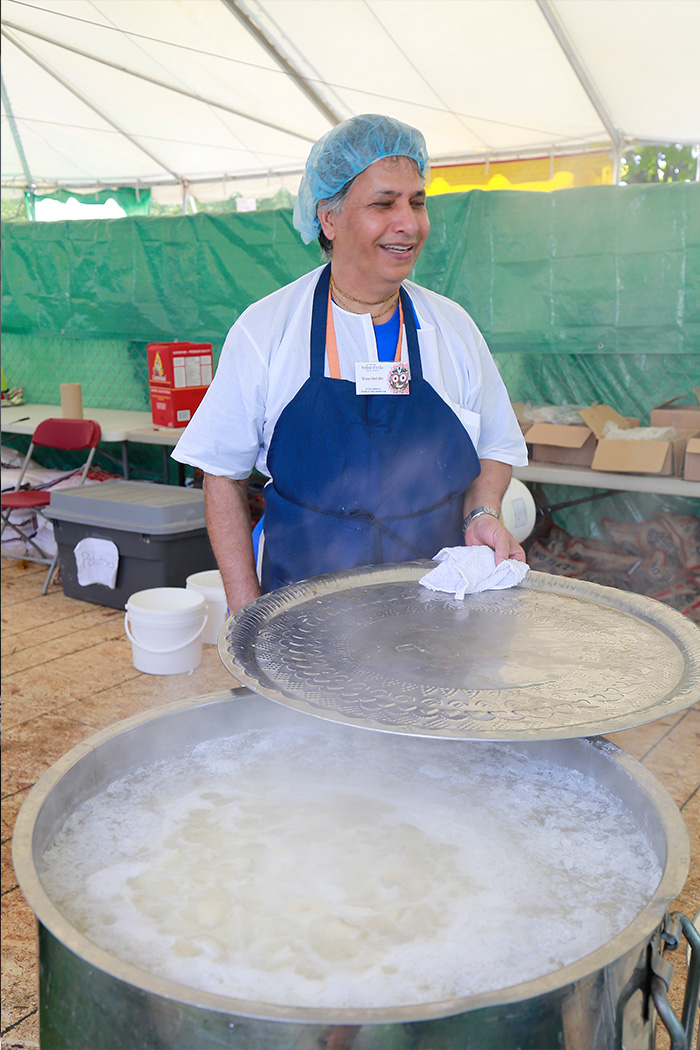 Visnu Hari Prabhu (seen above) is the principle cook, along with his son Vishal Prabhu, and many other transcendental Krishna conscious expert quantity cooks, prepare the number 1 best Ratha-yatra feast in North America.

Toronto is the only Ratha-yatra & Festival of India that we know of where ALL the prasadam is cooked fresh right in the tents at the festival site.
Still further--continuous free feasting on a sumptuous feast of Krishna-prasadam for 35,000 people cooked fresh on the island.
The crew had lunch boxes and provisions for a long stay on Centre Island. Practicaly every tent fitting was pulled out of the FOI trailer as stakes, ropes, and man-power secured each carefully assigned tent in it’s exacting location. 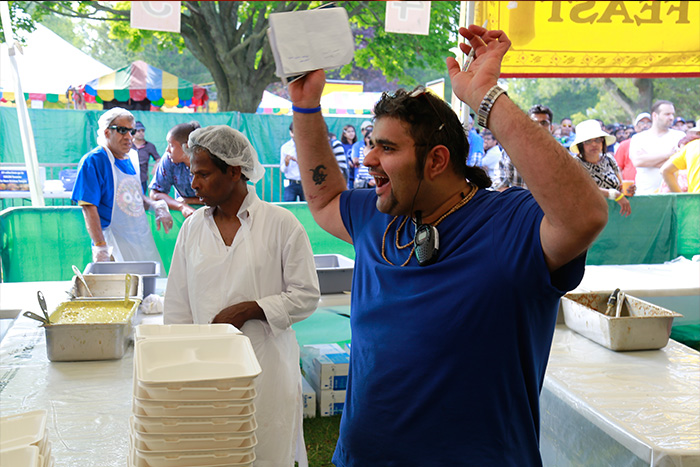 Hanuman Prabhu (in the white kurta) organizing the distribution of 35,000 plates of delicious Krishna prasadam, and his helper chanting Haribol! 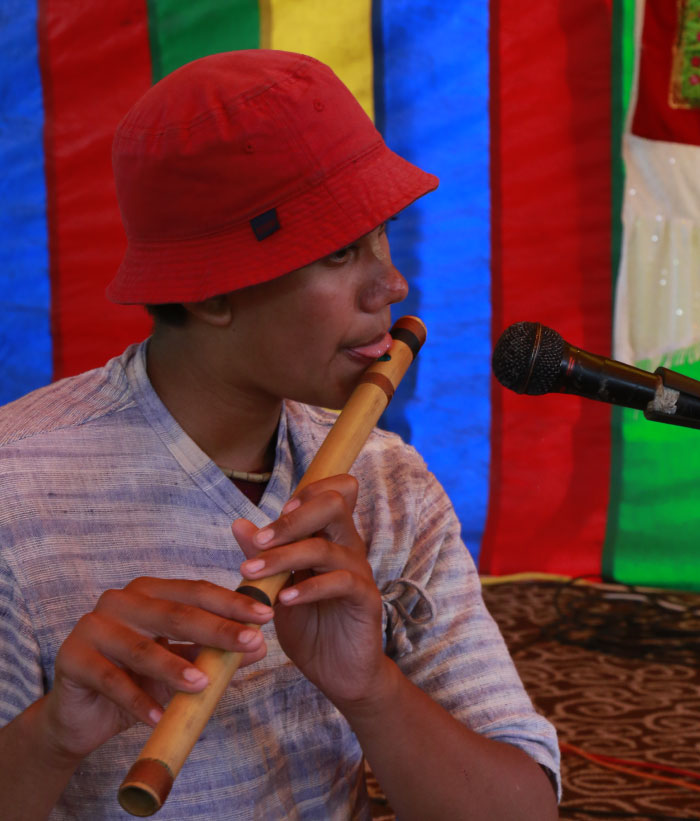 Giri-govardhana Prabhu, the youngest man on the 2014 Festival of India crew plays his flute in the kirtan.

The exhibits up were up and Srila Prabhupadas voice well before the throng arrive. The popular picnic and recreation reserve warmed to Krishna Consciousness moment after moment. 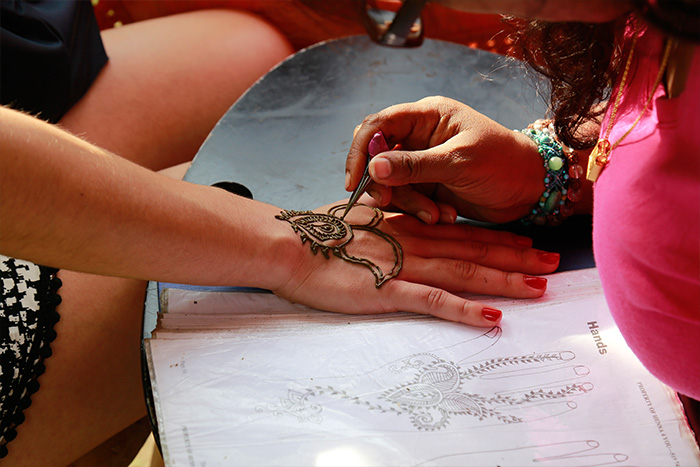 There was something for everyone at the festival. 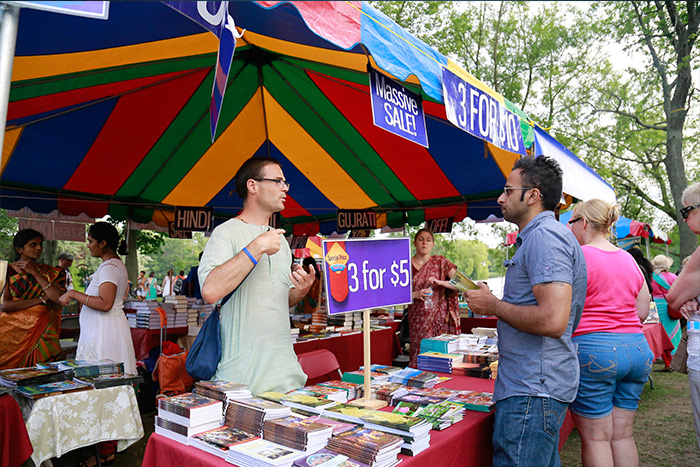 As with Montreal, the Hare Krishna youth tour-Boys Trip were on-hand to be spotlighted onstage, highlighted in many other areas and to vigorously lend their numerous hands in disassembling and packing up- we’re so grateful for their assistance.
Sunday Morning we were threatened with a huge downpour. The rain came down so hard it almost took down the giant 60’ x 90’ tent the main stage was in. Later on Sunday the sun came out and the weather was perfect.

After another ecstatic festival day, the crew, along with about 25 enthusiastic devotees from the Hare Krishna Youth Ministry “Boy’s Trip” took down and packed up the festival in record time. Special thanks to Manorama Prabhu and the Boys on the Tour. Hare Krishna.

To get to the festival site, first the FOI tractor-trailer has to go on 30 minute ferry ride to Centre Island, then we have to cross over a short but very steep bridge.

After crossing the ferry back to the city of Toronto, we started another marathon drive towards Thunder Bay—It’s at least a 22 hour drive in a truck and we needed to be setup by Tuesday at 1:30 PM in order to be on time for Thunder Bay’s First-ever Ratha-yatra. You can read more about that in the upcoming blog………..