The day after Vancouver Ratha-yatra/Festival Of India the crew set to the task of reassembling all plus more of the equipment that had been used at the Second Beach Festival site. This time for Lord Sri Krishna's advent celebration-Janmastami. Hare Krishna. 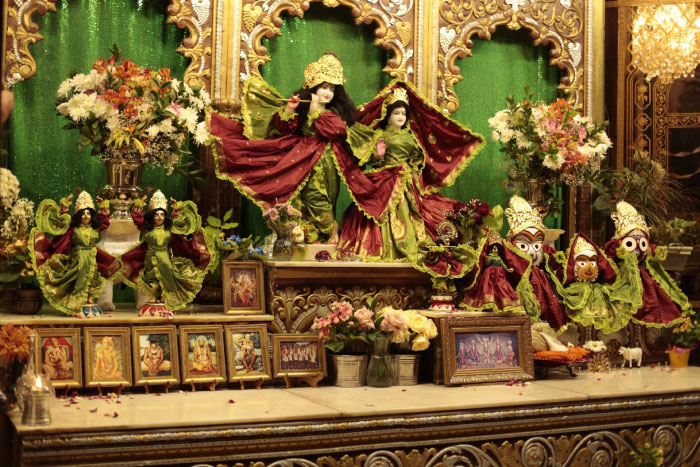 Though somewhat weary from the weekend efforts camped in Stanley park, duties called and answers were given. As we've all been trained by Srila Prabhupada to "do the needful", what is the difficulty? 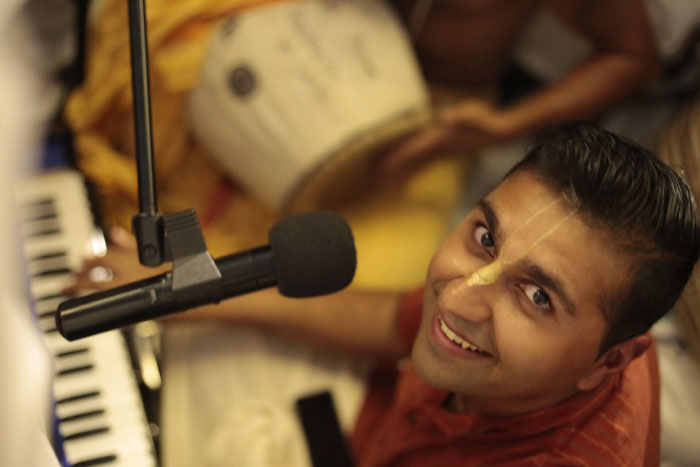 A few hours in the hot sun readied everyone for lunch prasadam. Then in place of labors, the period of recreation in the form of swimming filled the remainder of the day. But as evening descended, another wave of efforts had nearly the entire layout fulfilled, yet not standing. This display of willingness won the admiration and favor of local devotee organizers. 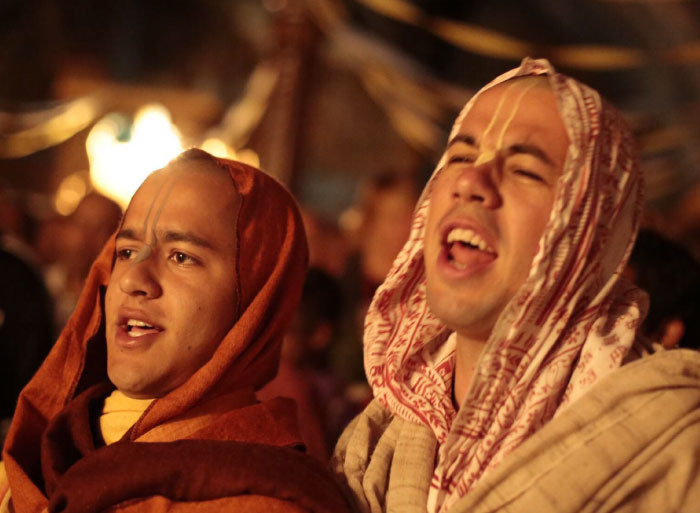 Thereafter, in spurts the details came into play. As devotee electricians wired each tent-top with lighting for the all night festivities. Also the proposal to join forces with Burnaby temple theater company had a few of FOI's personal running drama rehearsals. 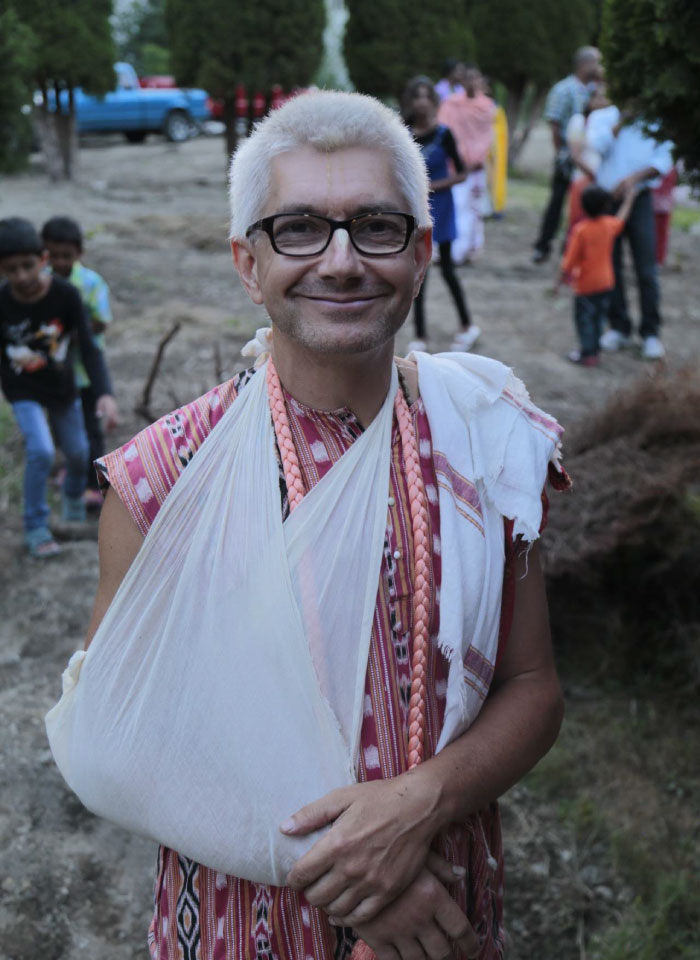 Even though suffering with a broken arm--Peter Kept the Vancouver Drama Troupe on Track, Hare Krishna. 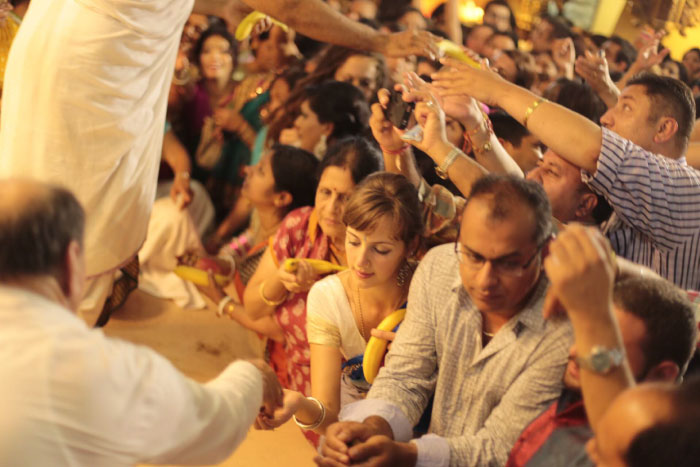 The restful days rapidly passed til the great vaisnava holiday came, Sri Krishna Janmastami Ki Jaya! From that most auspicious time--mangal arotik to midnight, smoking kirtans, blissful bhajans and an amazing array of activities filled the hours. It was fasting til midnight for the dedicated, still many chores were accepted and executed in preparations for greeting tens of thousands of guests; immense quantities of Sri Krishna Prasadam was prepared, a gigantic transcendental Birthday cake for Lord Krishna--The Supreme Personality of Godhead, was baked, assembled, and decorated delightfully. Lovely decorations also adorned the swing, swan boat, bathing platform, etc...Hare Krishna. 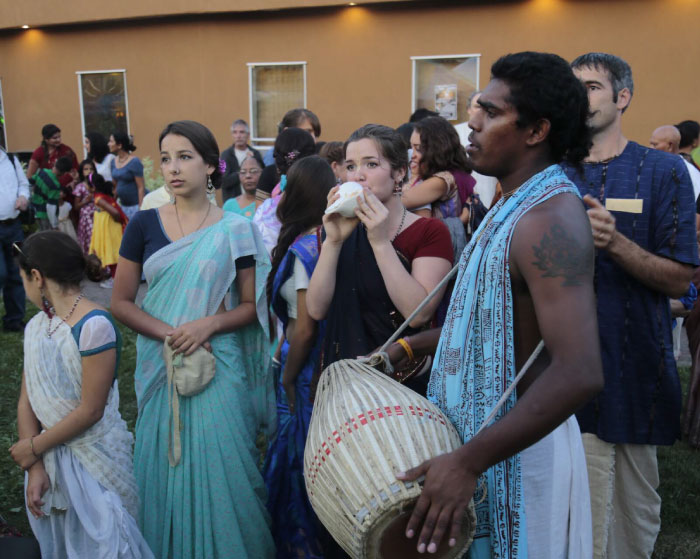 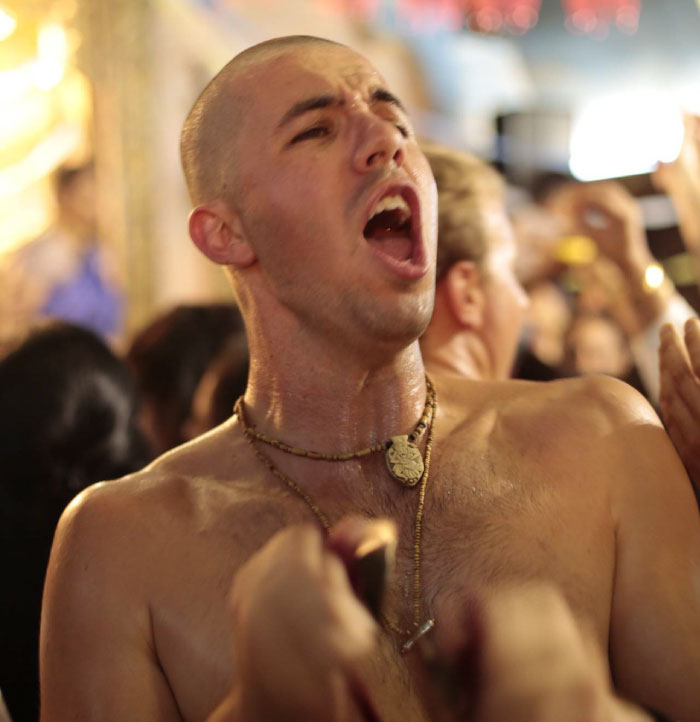 Seemingly endless lines formed in the directions of these booths as hordes of pilgrims flooded the temple room to hear of and see the all glorious Lord Krishna--Sri Sri Radha Madan Mohan Ki Jaya!

There was Bharat Natyam and Drama. Everything was helping everyone to remember Lord Krishna!

One new touch was a "wishing tree" were hopefuls could tag the branches of the centrally located tree to wish in writing. 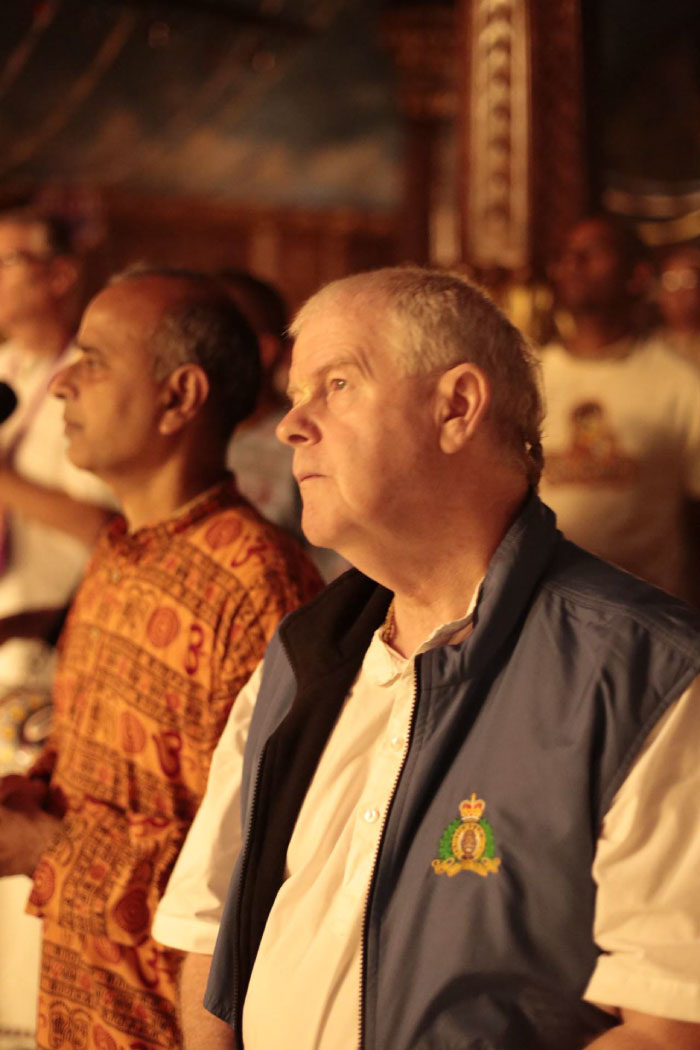 Meanwhile, as photographically recorded, eager servants carefully created the flower outfits for the midnight debut as others sweetly sang for the pleasure of Their Lordships and all others who were fortunate enough to gather. 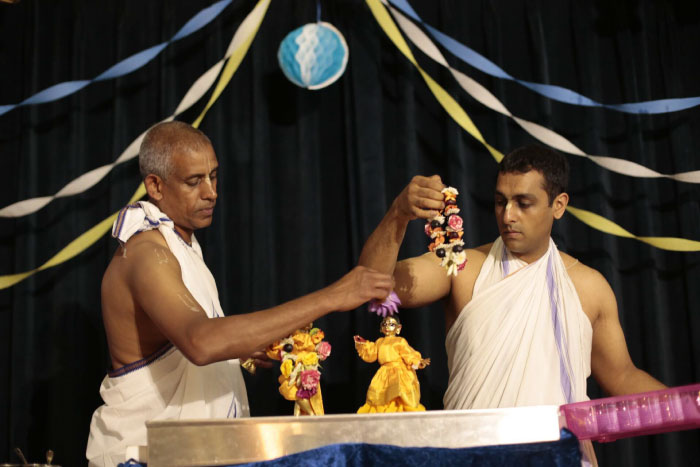 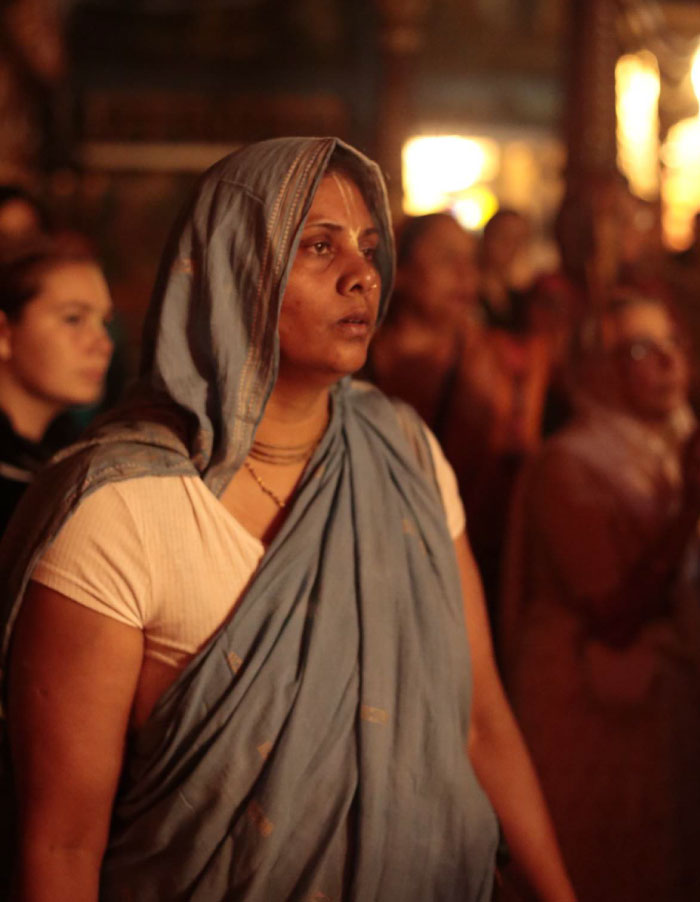 Next morning, Srila Prabhupada's Vyasa Puja found only a few up and running at the time of his standard Guru Puja but by mid morning, the temple room was again packed to capacity. 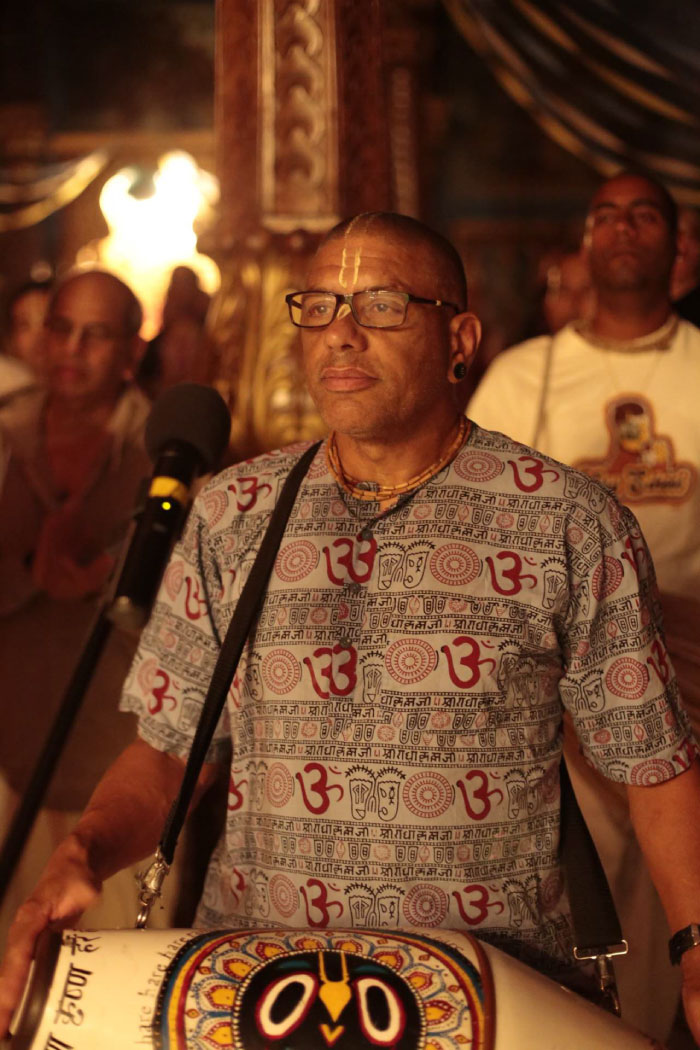 All the while, outside, FOI crew and inspired veterans dating back 2+ decades, performed their offering of devotional services as worship to/for Srila Prabhupada. Yes, cleaning up after Janmastami and reloading the FOI trailer is no small job but, many made the action a joy! As young and old, fathers, wives, daughters and sons all worked in unity. No doubt Krishna and the param para were most pleased. 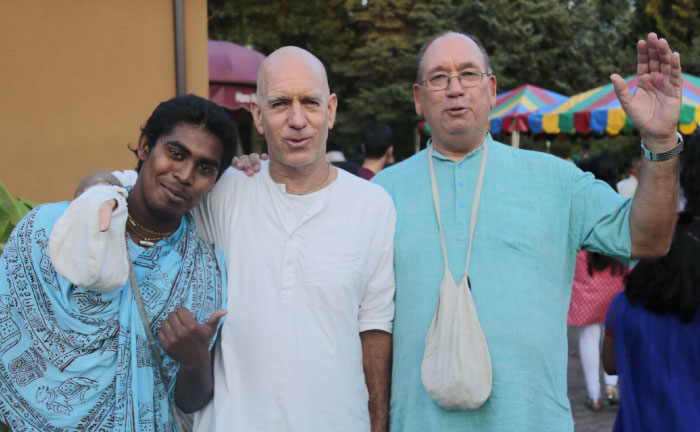 Their beautiful lordships, and the worlds' beautiful spiritual master, Their beautiful paraphernalia and beautiful offerings competed in beauty with the beauty of the beautiful devotees' surrendered loving services. All the wise readily agree that there is no competing with Lord Krishna. For He is the supremely beautiful everywhere at all times. 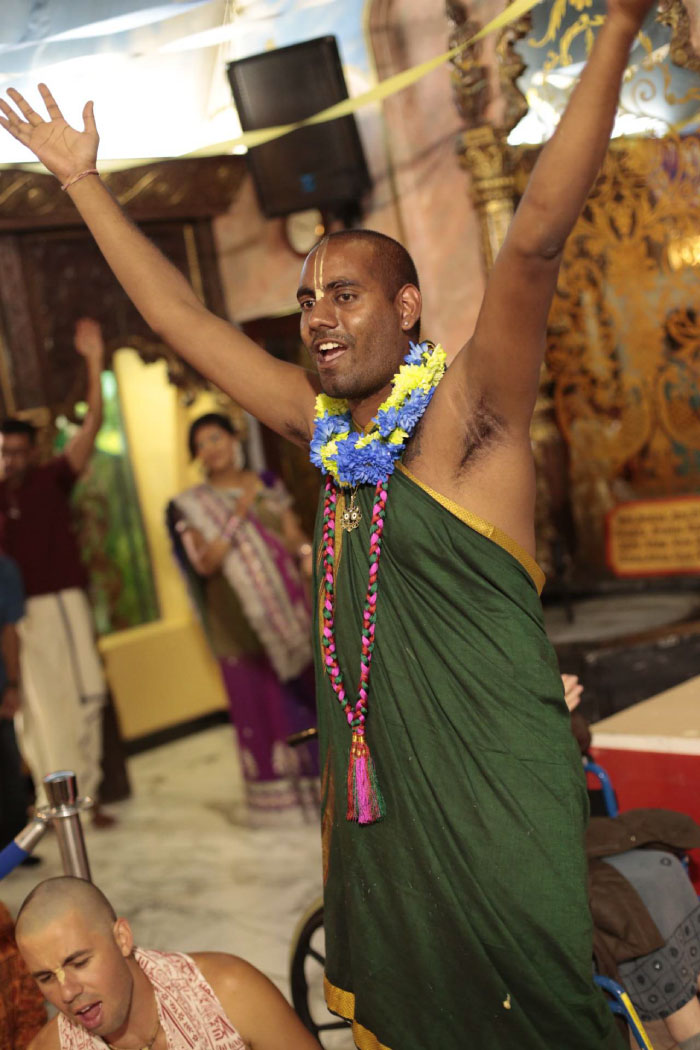 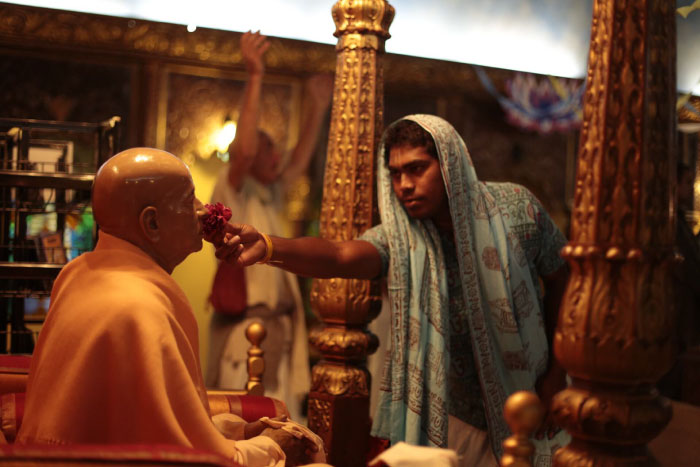 Krishna Caitanya Caitanya offering a flower to Srila Prabhupada.
Next morning early, out of the Burnaby temple parking lot motored the FOI vehicles-south-bound. San Francisco next!