Cool yet comfy... A rare occasion in San Francisco--2014 Ratha-yatra and Festival of India

On the morning of Saturday August 23, Festival Of India's mini-motorcade managed the hills of San Francisco to arrive in a timely fashion for setting up the Sharon Meadows Hare Krishna Circus in Golden Gate Park--The same Park where Srila Prabhupada sat chanting the Hare Krishna Mantra on Hippie Hill 48 years ago. Hare Krishna. 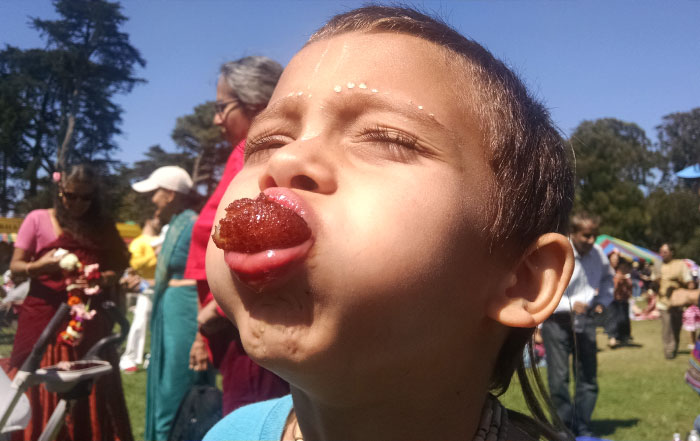 Abhay enjoying one of the thousands of totally wonderful and simply delicious Gulab Jamans that were part of the Free Feast at this 2014 San Francisco Festival. Sri Krishna Prasadam Ki Jaya! Hare Krishna.

A fine tuned circular arraignment has served for many years running the purpose of the Bay Area organizers. Once designs were in hand, and a few minor details clarified, the precision service began. What with some crew illnesses and numbers gradually diminishing, the setup was significant of well learned procedures and co-operation. Shortly after lunch prasadam the day's devotional services continued. The finishing touches--setting up Festival of India's transcendental Exhibits; hanging the multi-colored sidewalls; and installing the sound system, were all done Sunday morning. 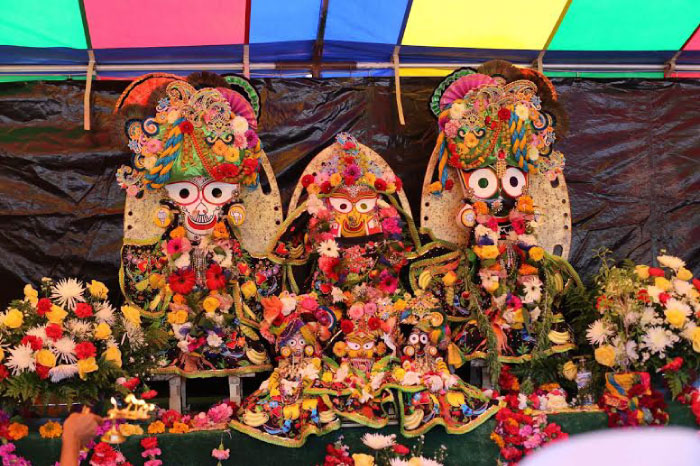 Lord Baladev; Lady Subhadra, and Lord Jagannatha in Their Festival of India tent on a special altar, built just for the San Francisco Ratha-yatra. 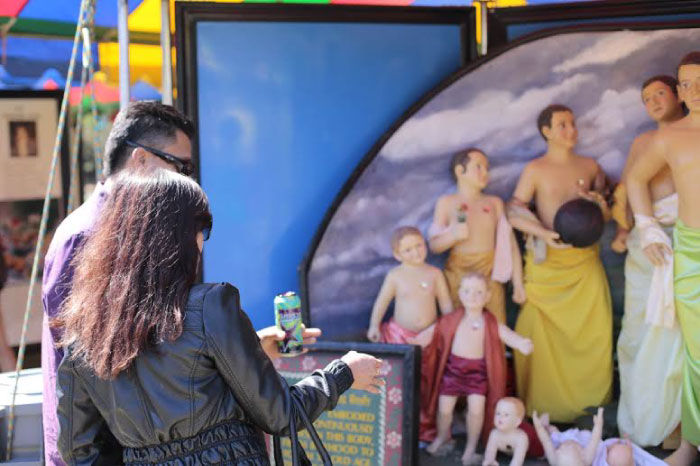 Simply the best, and most attractive Exhibit that Festival of India has ever had--The Changing Bodies Diarama. 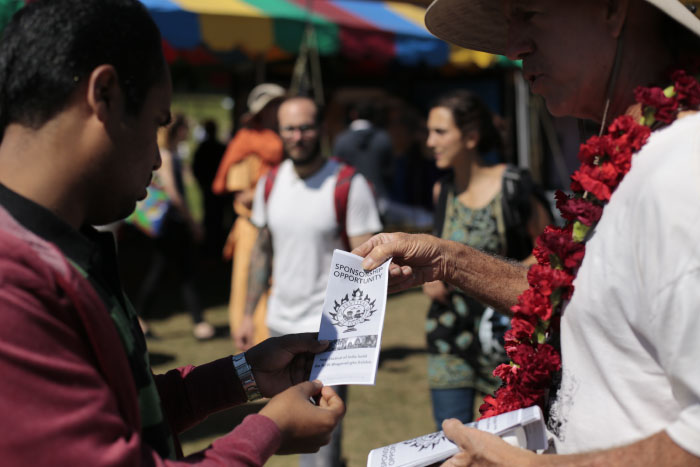 Many fliers were distributed giving people the opportunity to help/to contribute towards, the new Bhagavad-gita Exhibit Festival of India is building. All the art and design is done, the exhibit is ready to go to the printer--then we just have to build the panels. Krishna willing, this exhibit should be ready for the 2015 tour. Hare Krishna.

By the inconceivable mercy of Lord Jagannatha the characteristic chill of Frisco was mild and balmy throughout Festival of India's stay. 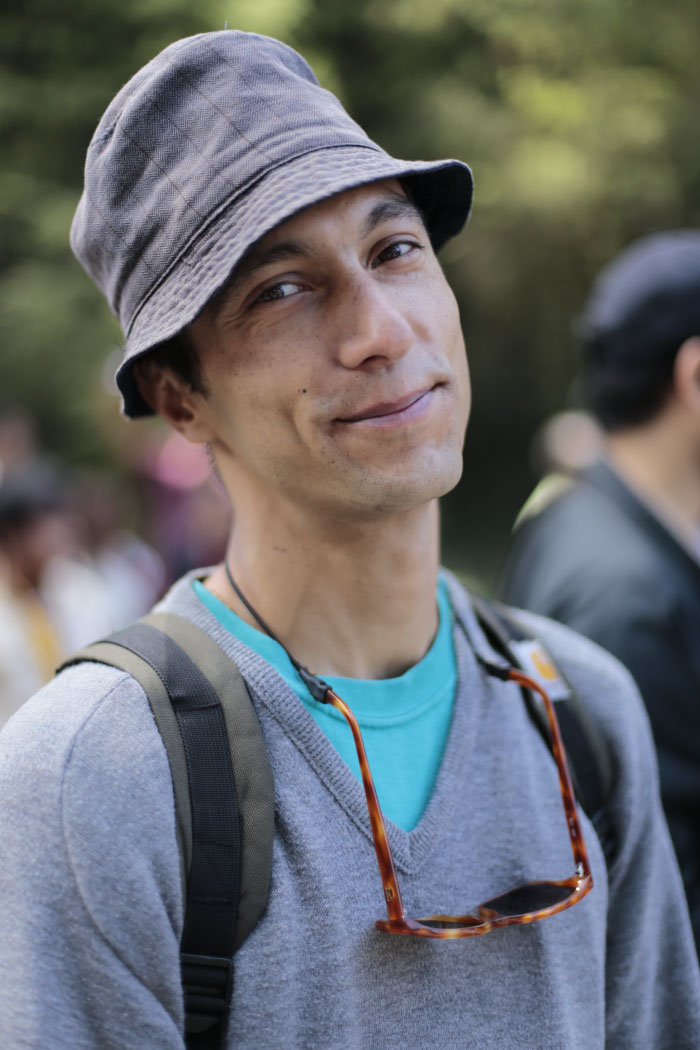 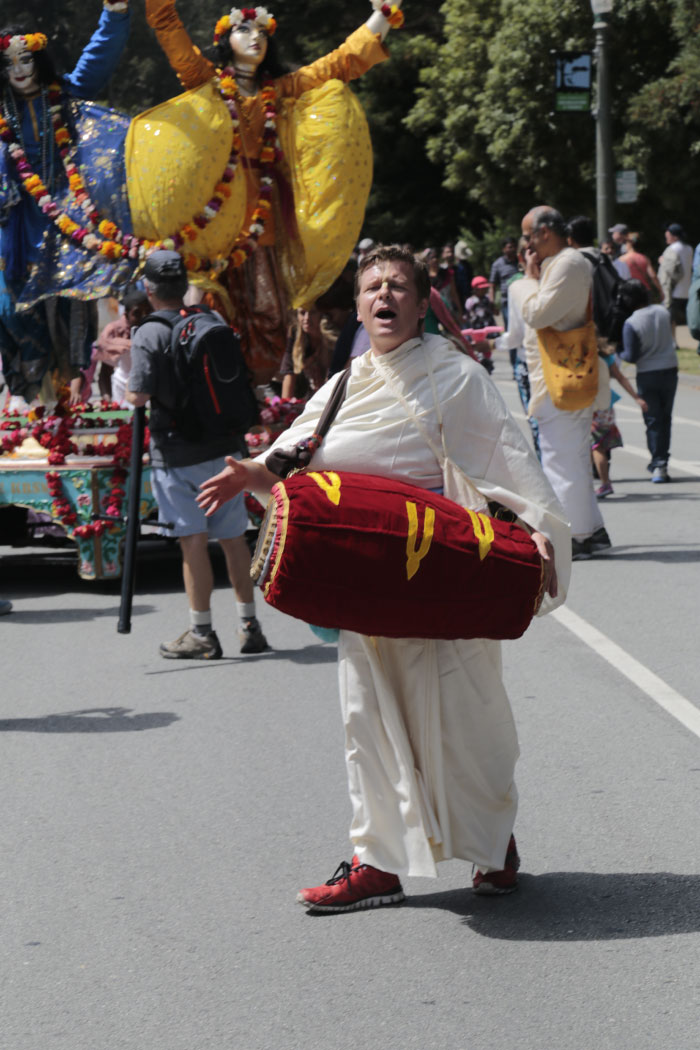 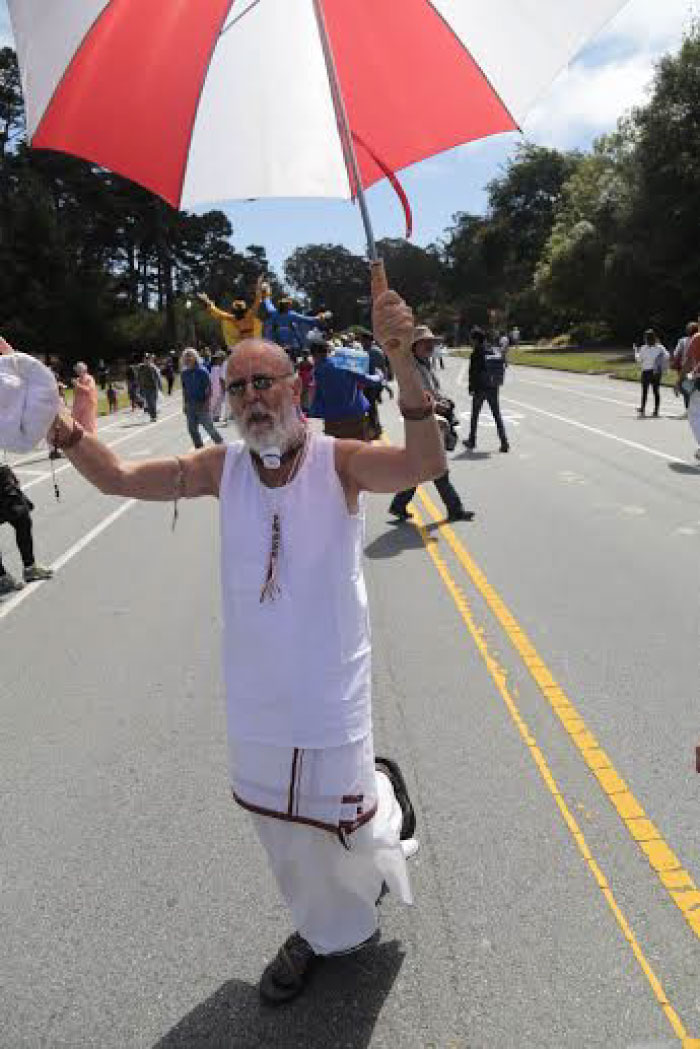 Ganesh Prabhu in the Raha-yatra Parade.

Ratha-yatra day began with hose/showers and immediate action in the direction of erecting panel displays, placing the changing bodies, and hanging sidewalls. This was followed quickly by connecting the sound system. Within a few hours, the vacant meadow was buzzing with energy. 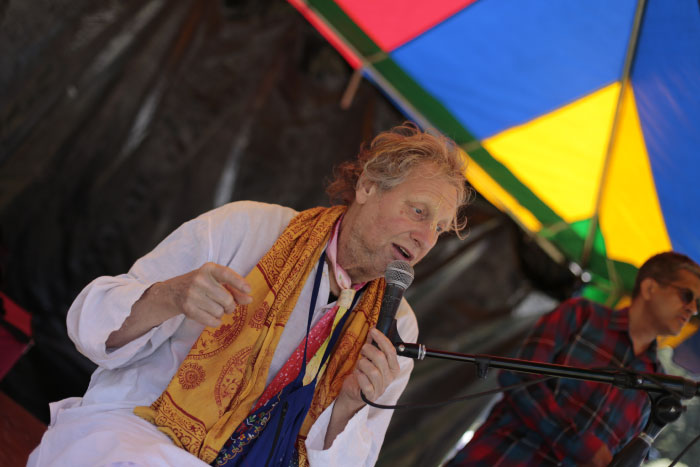 Gurudas hosted the Srila Prabhupada Bus Tour around San Francisco, as well as took the role of the MC on the main stage. 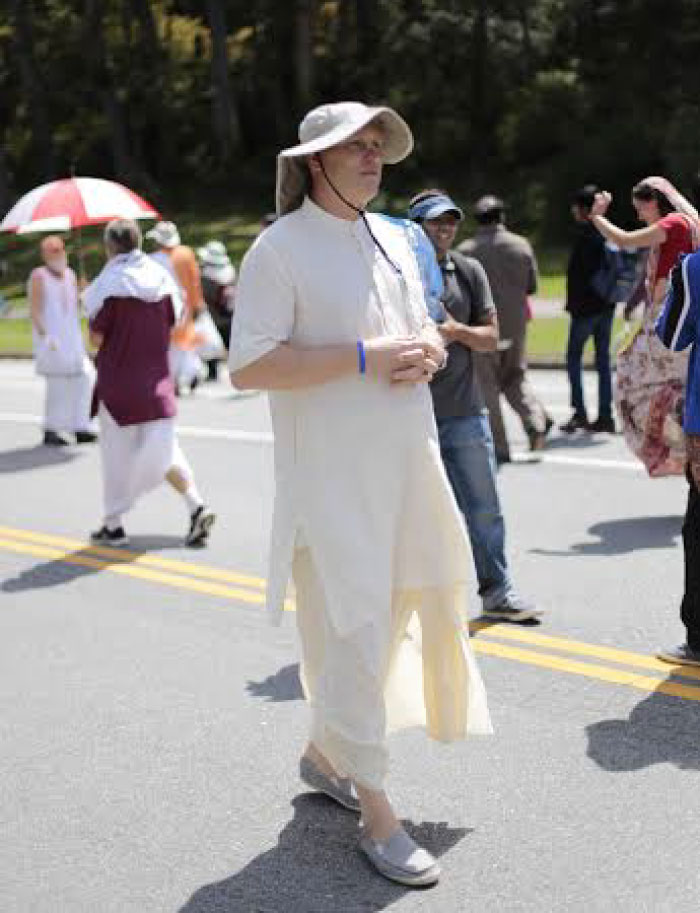 A rare shot--Vaisisika Prabhu in the Ratha-yatra parade without a book in his hands. He must have just passed out his last book on the way back to the Festival of India site. 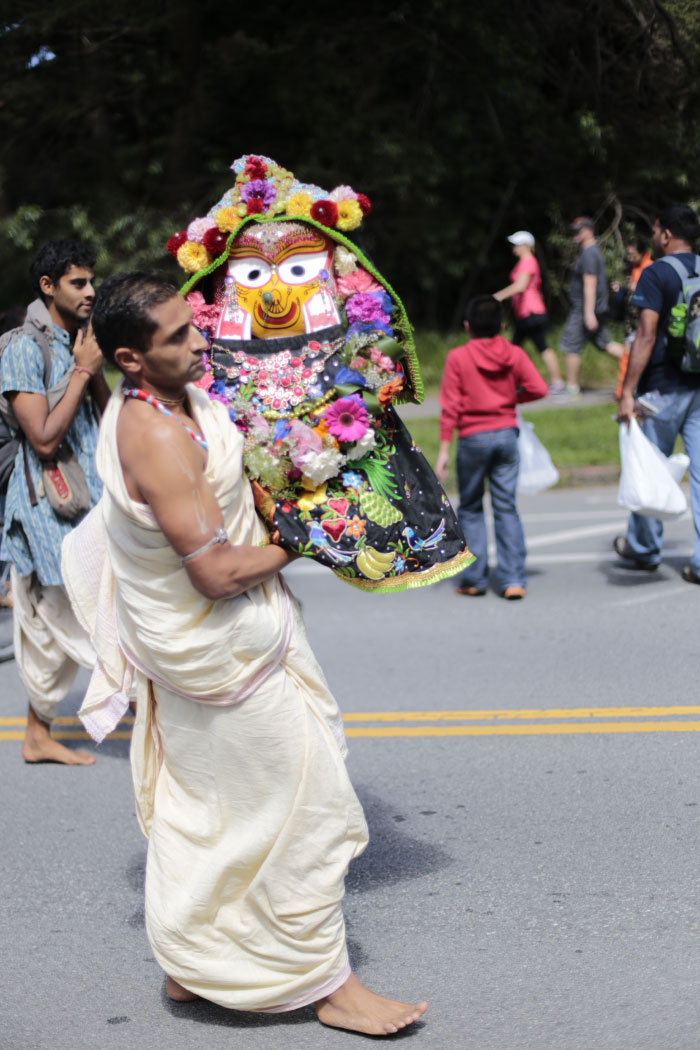 Lady Subhadra being carried to Her spot on the altar. Hare Krishna. 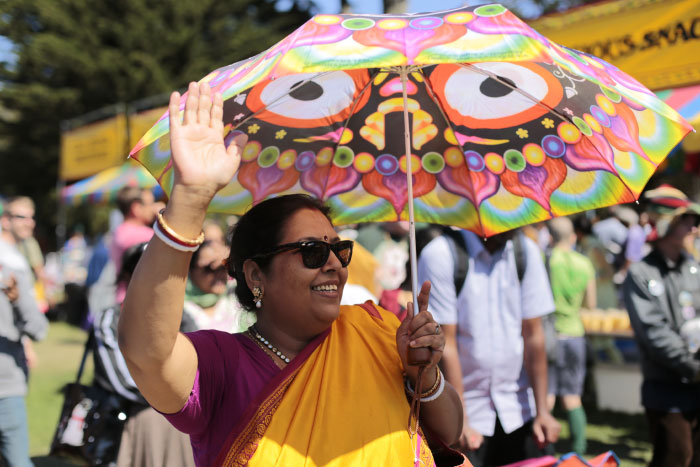 Everyone was taking shelter of Lord Jagannatha, Hare Krishna.

Time sped by as crowds thickened; the inquisitive stepped forward to hear melodies of Hare Krishna kirtan being chanted on the main stage, and to study Festival of India's exhibits & displays. By the time the chariots rolled into the Sharon Meadows Park, just below the famous Hippie Hill, books and book distributors were saturating festival goers with Transcendence.

One highlight of San Francisco is that the Bhaktivedanta Institute, the science/scientific department of ISKCON North America is situated in Berkeley. In order to accommodate drawing people to B.I. Booths the "Higher Dimensions in Science" sign and exhibit was provided. The chief spokes person for Bhaktivedanta Iinstitute reported that they attracted lots of attention and many inquiries were met with the distribution of Srila Prabhupada's books, what to speak of verbal responses. Interest in Krishna Consciousness is at every level for every individual; this particular event attests to that. 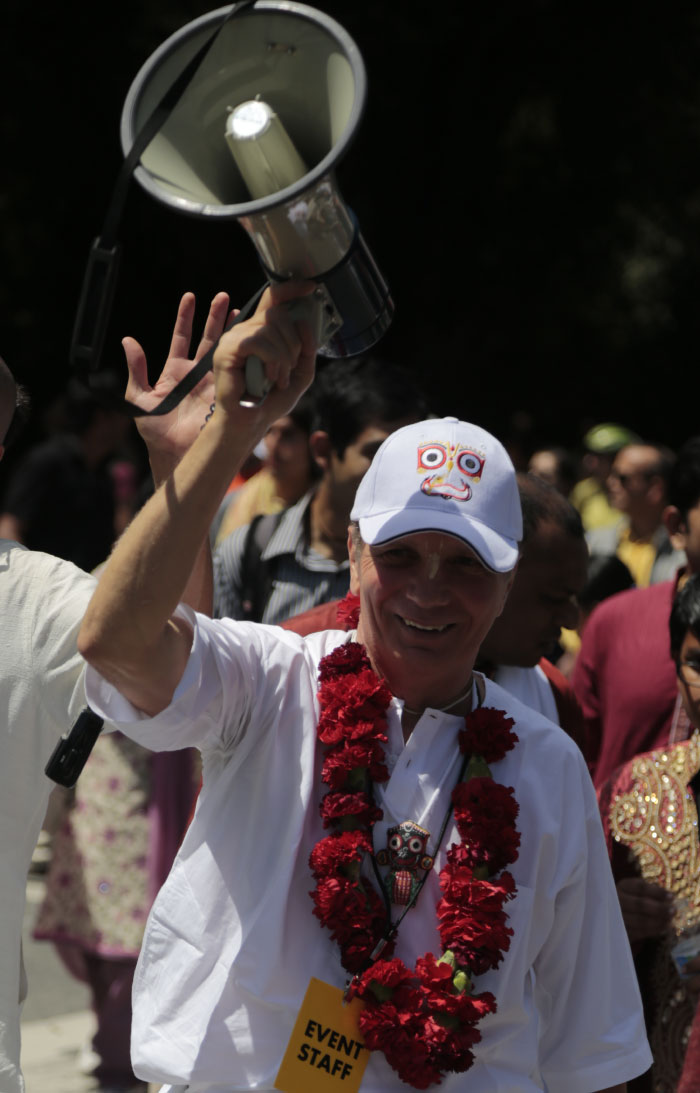 Jagannaha Swami Prabhu, the main organizer of the San Francisco Ratha-yatra and Festival of India for more than 25 years, and still going strong. Nitai Gaura Haribol! 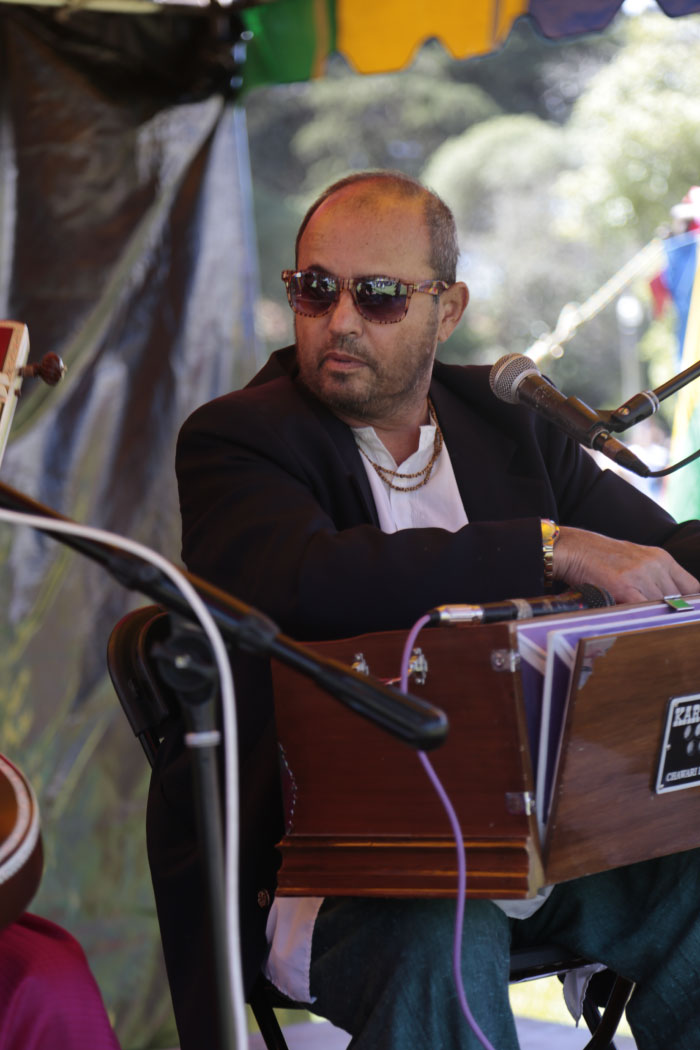 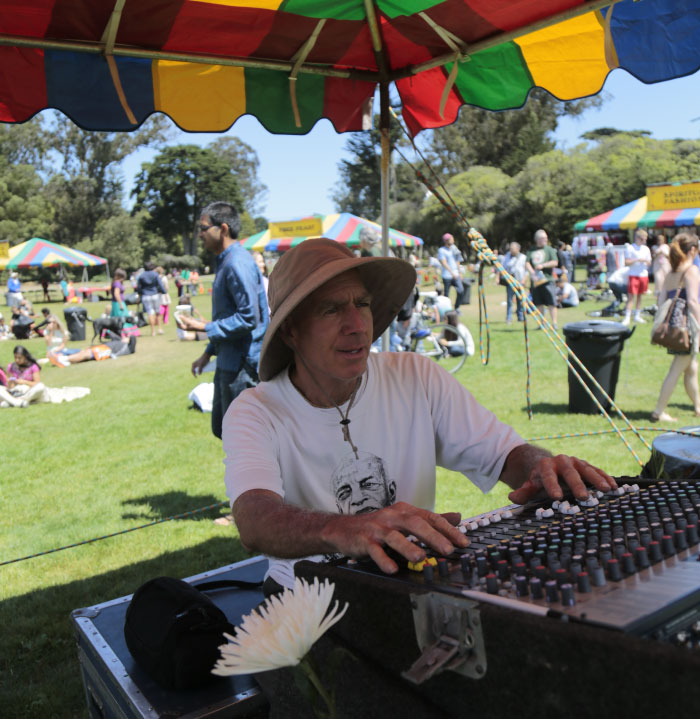 At least three generations of western Vaisnavas involve themselves with the celebration. A simple, nourishing, hot free feast was served, there were even Gulab Jamans in massive quantities, that were served to everyone as stage presentations entertained. Their Lordships Jagannatha, Baladeva and Lady Subhadra presiding over the gathering, everyone seemed delighted at heart. No wonder, for Krishna resides there, and is bestowing opportunities to every embodied soul to recognize His presence. 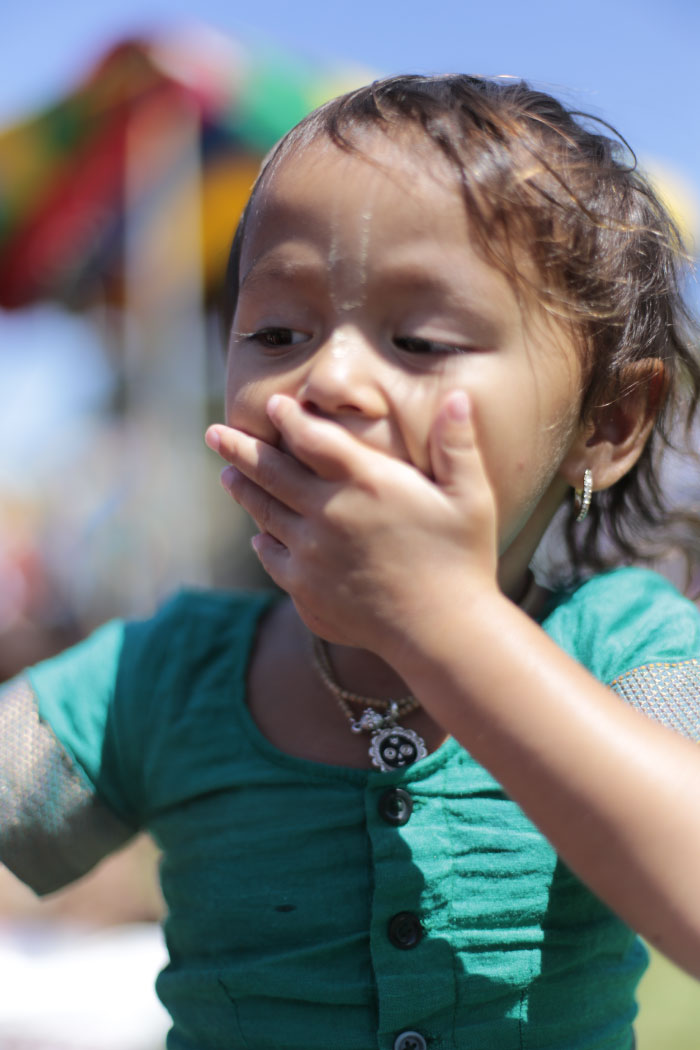 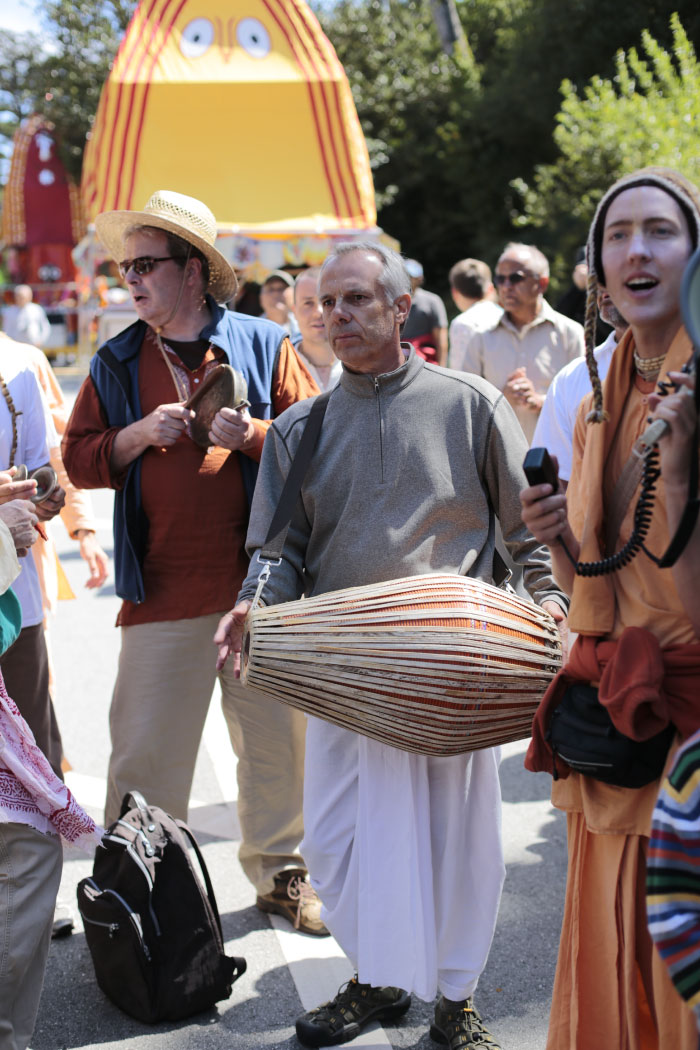 The day continued, the crowds began to thin, yet the weather was steady-breezy-but-comforting. Hare Krishna. 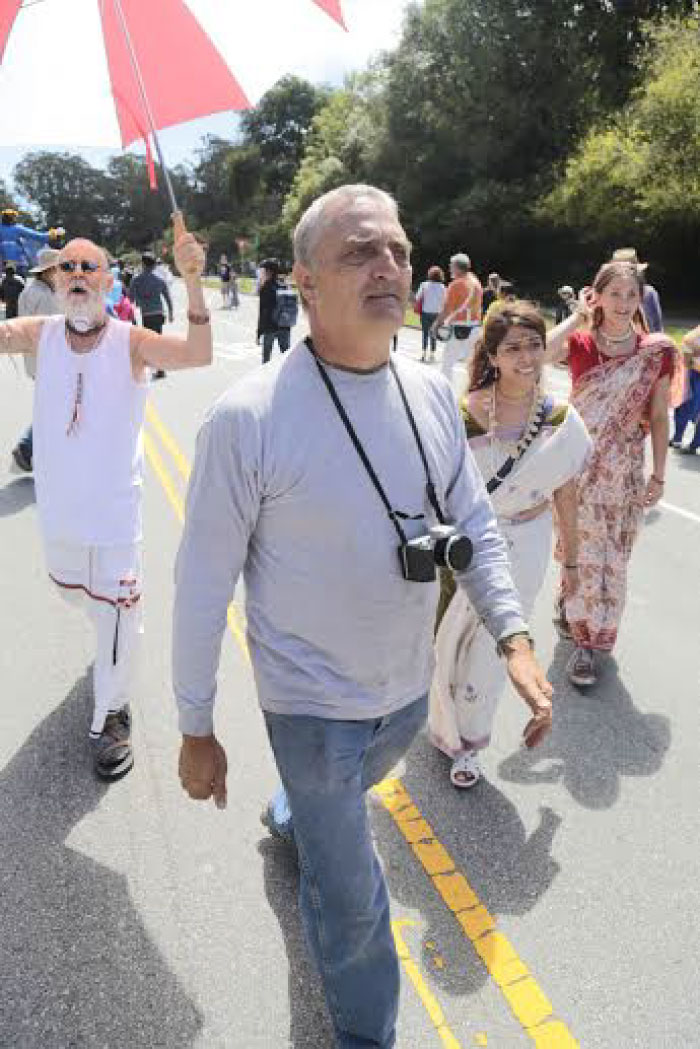 Ratna Bhusana Prabhu, brought one of the Los Angeles Chariots and the Pizza booth to SF. 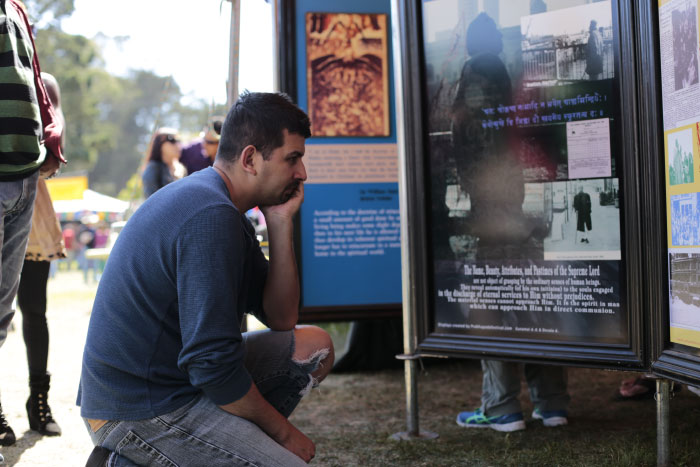 People were studying the exhibits all day, seen above--someone reading the "Who Is Prabhupada?" exhibit. Srila Prabhupada Ki Jaya!

The dis-assembly process started, and so many devotees and guests came forward to help--it was wrapped up efficiently. 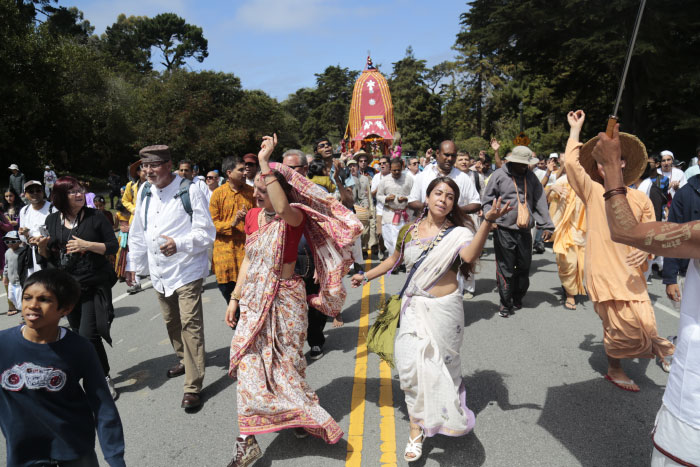 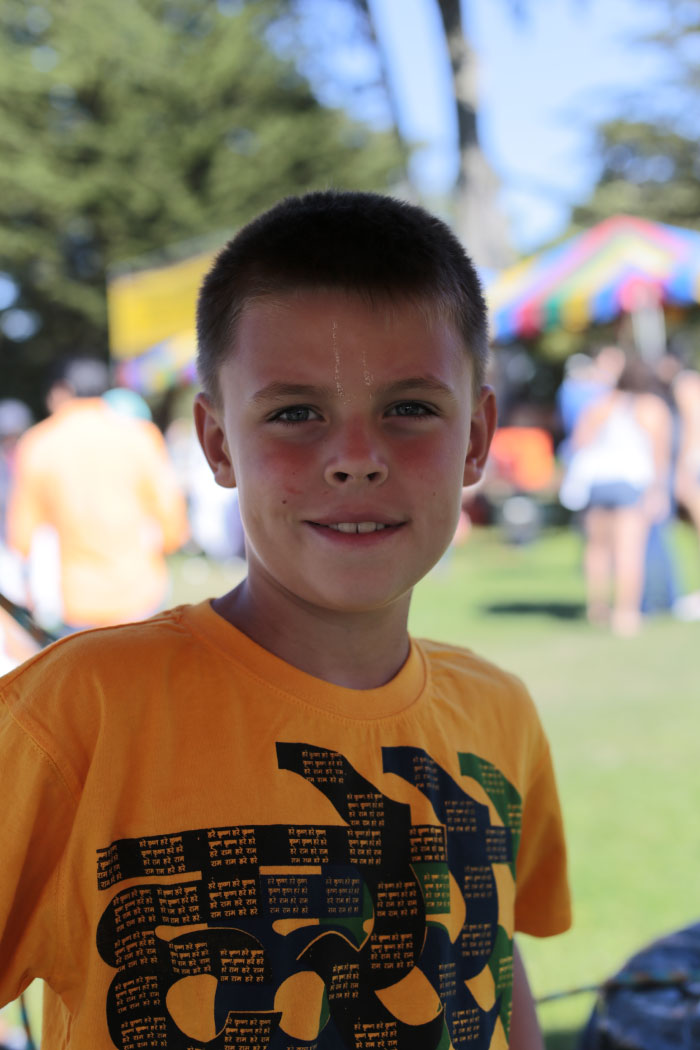 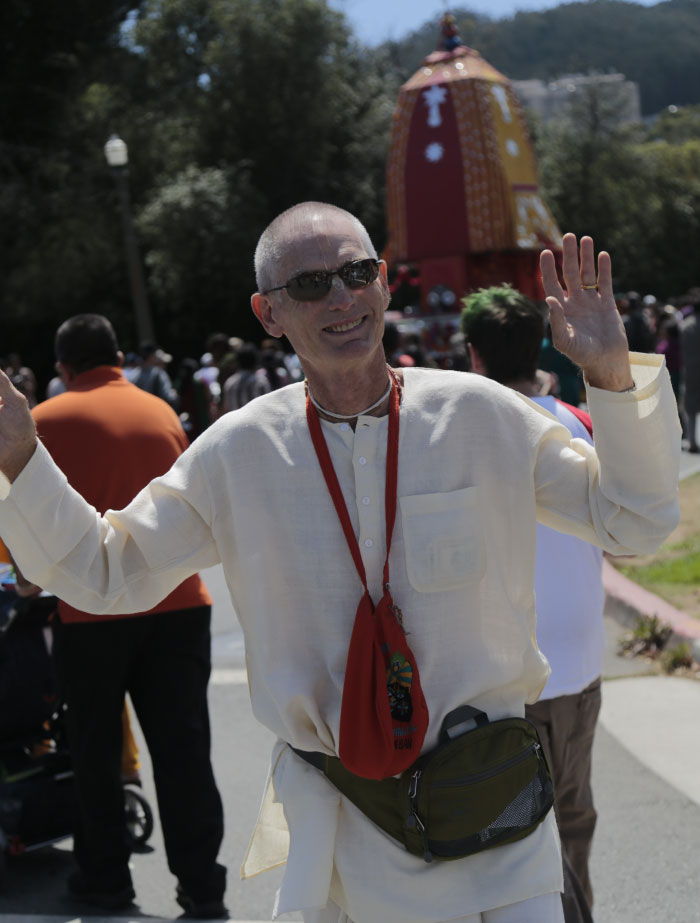 Veda Guhya Prabhu, One of Festival of India's major supporters.

One local devote declared, "i have never seen a festival come down so fast in my life!" All glories to Sri Krishna The supreme cause of all causes", Hare Krishna. 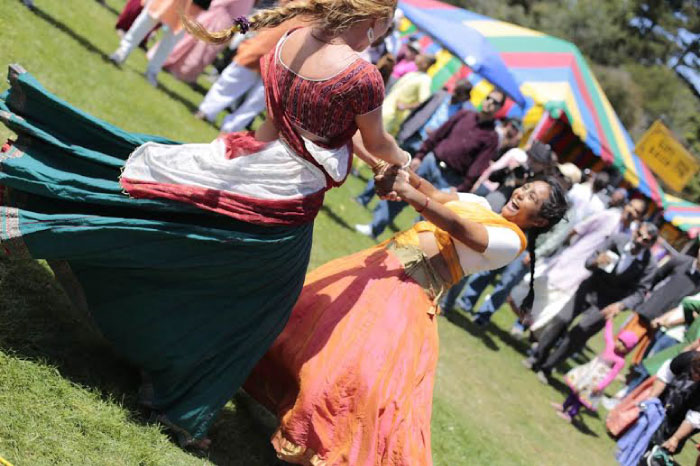 Sridevi and Vishaka, dancing, dancing, and spinning in front of the stage during the kirtan. 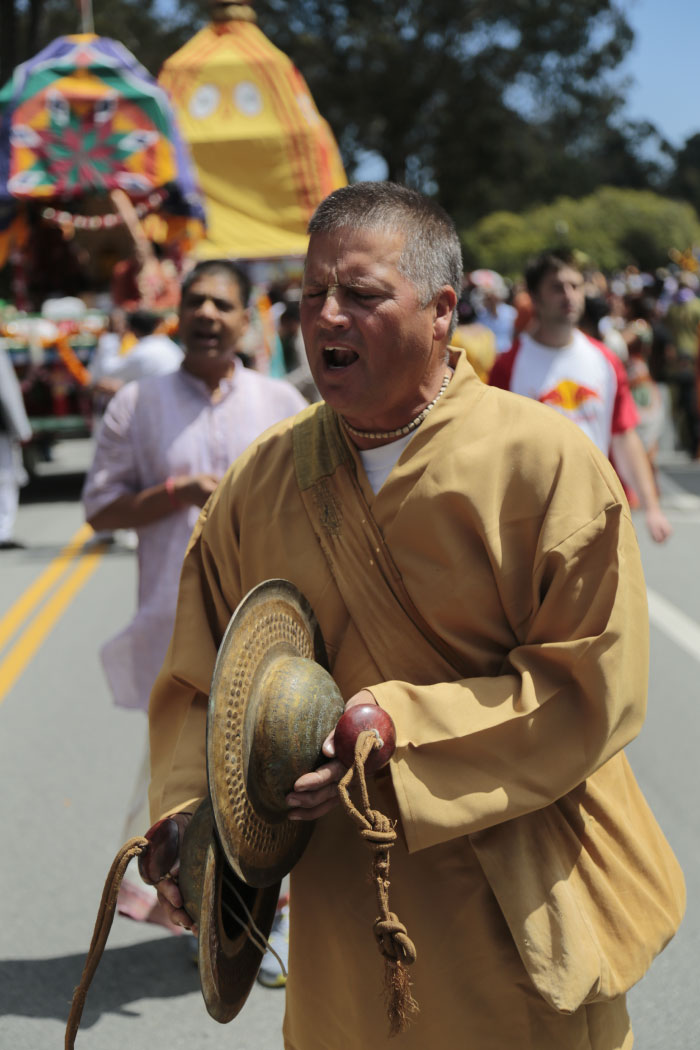