We arrived in Edmonton about 8:30 pm Sunday Evening, Sudama Prabhu, one of the resident pujaris, prepared some first class kitre for the hungry crew.

The first day in Edmonton, Giri and Nrsimha Prabhus washed the Harinam Van (Festival of India’s Van that Ambarisa Prabhu donated in 1998), then Govardhana-dhari and Govinda Prabhus washed the F-350 pickup truck. Cleanliness is next to godliness. We do our best to keep the vehicles in first class mechanical condition so the devotees can be safely transported and very clean. 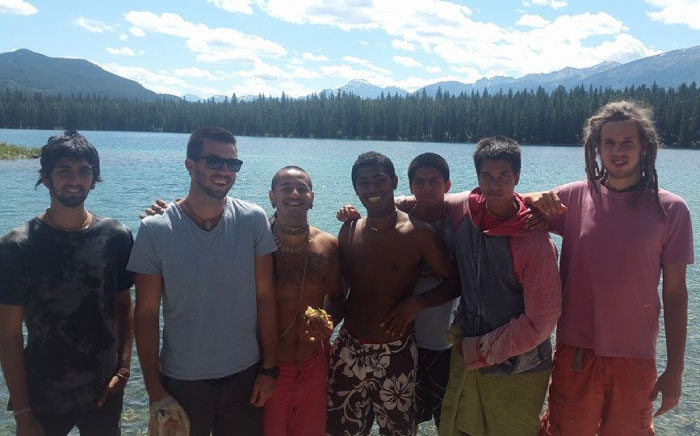 From Left to right: Vishvamber from Prabhupada Village; Nitai Chandra & Govardhana-dhari both from Australia; Krishna Caitanya from Vancouver; Nrsimha from New Talavan; Giri-Govardhan from Dallas; and Govinda from Prabhupada Village all in front of lake at Jasper National Park.
About 7:30 am Wednesday morning, most of the crew left to Jasper National Park in the Canadian Rockies. It was about a three and a half hour ride just to get into the park. 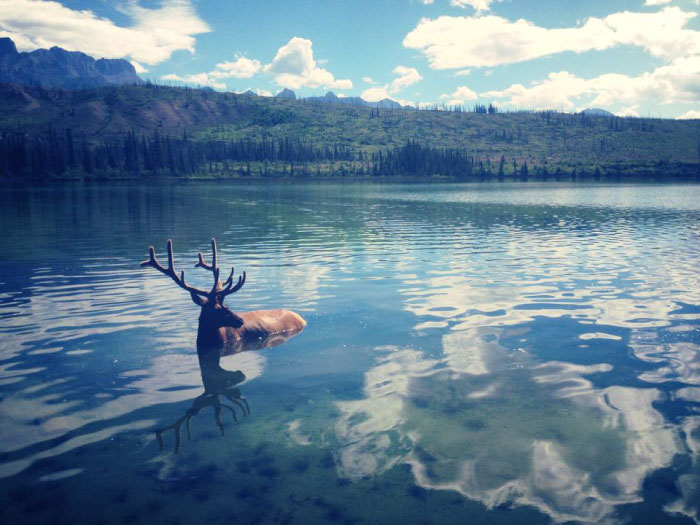 Jasper National Park is one of the most scenic and exciting parks in all of North America complete with Moose, bears, glaciers and much much more…They returned to the temple about 2:45 am the following morning. After just a few hours rest, they woke to the call of duty…

We originally planned to do the setup on Friday because the Hare Krishna Youth Ministry “Boy’s Trip” were going to arrive in Edmonton to help Friday morning. It was going to be the last festival they would be helping us on in 2014. The weather forecast was for very heavy rain, as well as—70 to 80 km/hour winds for Friday. Hearing about the predicted stormy conditions, and encouraged by Bala Krishna Prabhu, the president of the Sri Sri Radha Govindaji ISKCON temple in Edmonton we started early Thursday to set up.

We setup 21 of Festival of India’s tents, which is about average for most of the festivals. With wind in the forecast, we held off and did not setup the panels or hang any sidewalls.

As expected it rained most of Thursday night, but it was just heavy rain—the tents were still standing when we went into the temple Friday morning for the morning program. About 7:30 that morning the wind just came in fast and one of the big tents was almost completely down—poles were bent, the wind had pulled the 30” long stakes right out of the ground and the wind was only getting more and more severe. Within minutes the whole crew was mobilized and the battle was on—to keep these tents standing—to prevent them from completely blowing away. These tents are engineered to withstand about 50 km/hour winds, and that morning in Edmonton it was blowing non-stop at nearly 80 km/per hour! In the Edmonton news there was a story that day, a devotee forwarded to me, how most of the flights into and out of the Edmonton airport were cancelled due to “High Winds”. Somehow the winds subsided by late Friday evening, and all the devotees were praying for good weather for Lord Jagannatha’s Ratha-yatra scheduled for the following day. 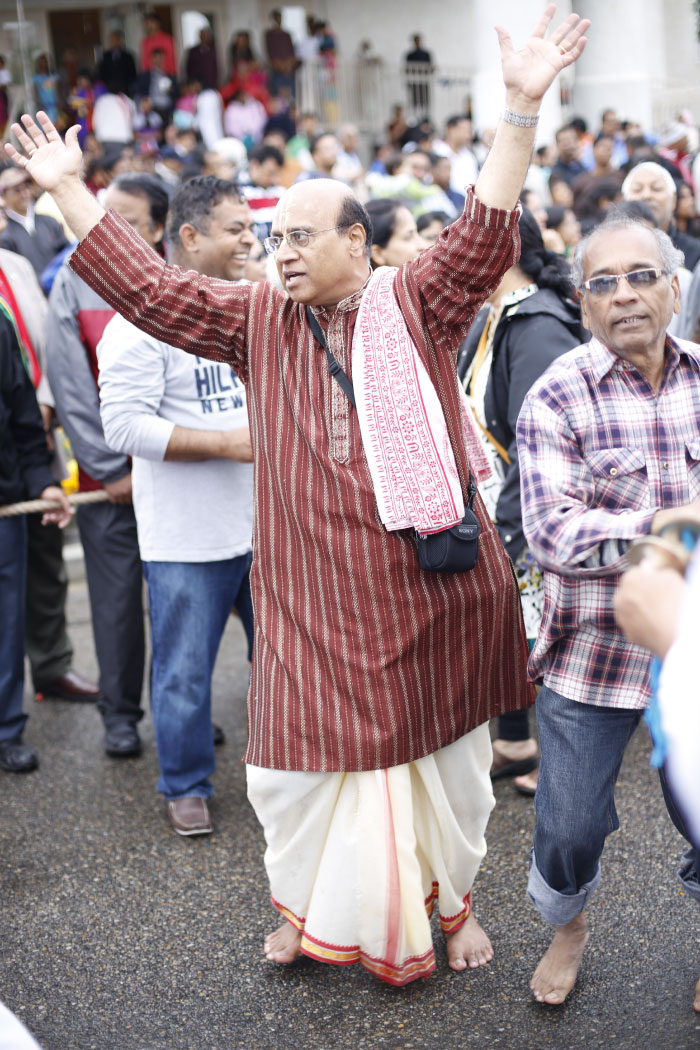 Saturday morning it was still raining, but the winds had subsided. Krishna’s mercy. We had to put up all the banners that blew down, many of the steel pipes that are used to secure the banners were bent or broken beyond repair, then we had to put all the tents back in their proper positions and re-tie all the ropes that hold the tents down. At least 18 tent stakes were ripped out of the ground by the winds and big tent had to be moved and tied down securely. 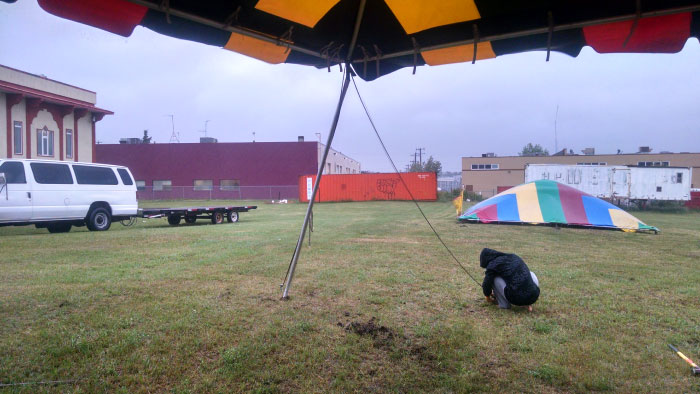 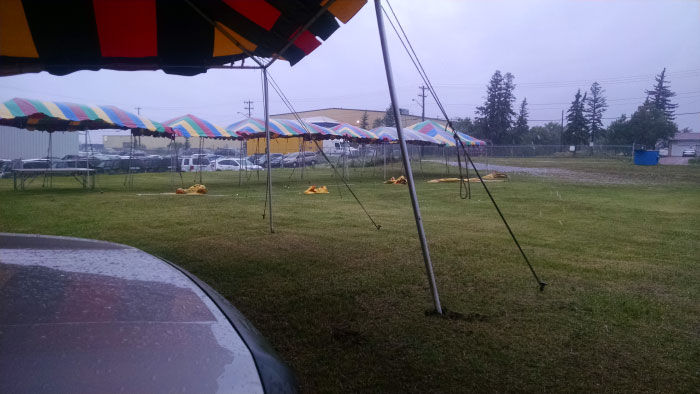 The storm took it's toll on the tents, and all of us who were doing all we could to keep everything from blowing away. 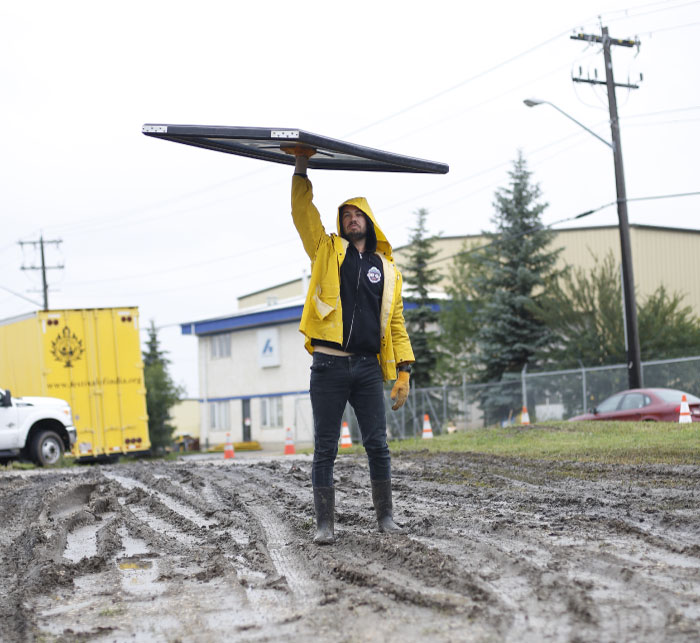 Nitai Chandra Prabhu carrying one of the exhibit panels through the knee-deep mud.

The rain gradually tapered off and stopped by noon. 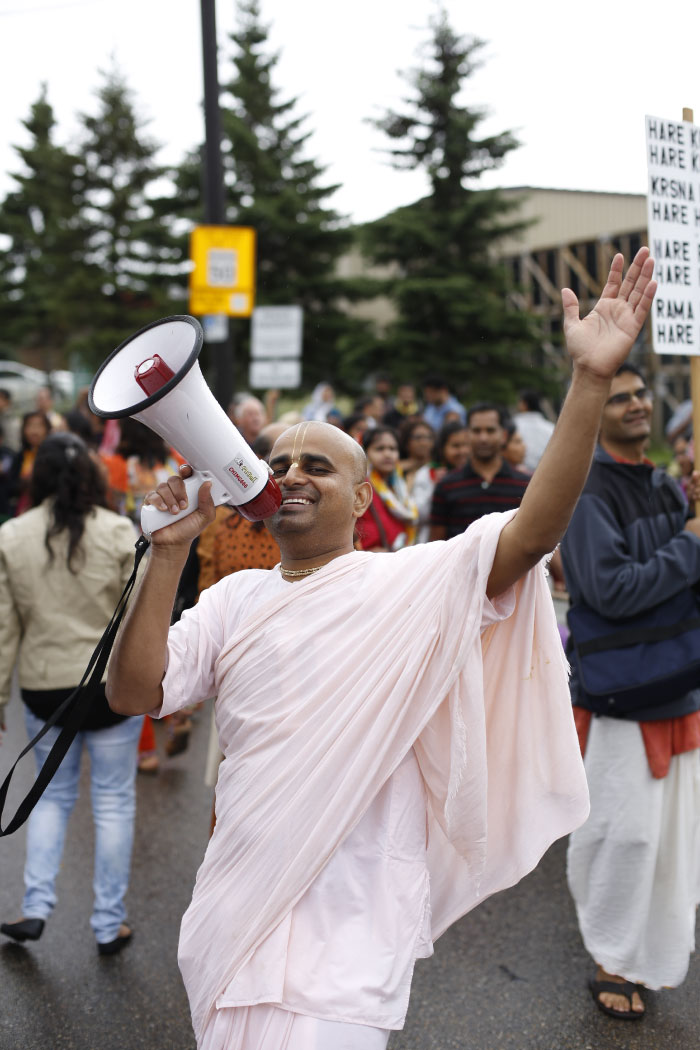 Ananda Prabhu, in complete ananda chanting the Hare Krishna mantra.
Prahladalada set up the sound system with Giri’s help. The rest of us hung sidewalls, then carried out & setup the panel exhibits.
Lord Jagannatha, Lady Subhadra, and Lord Balaram were placed on Their Chariot, which Sahadev Prabhu brought from Calgary. There was an arati offered to the Lord then the procession began. Following the Calgary devotees, Bala Krishna Prabhu arranged for a flatbed trailer to be pulled with Festival of India’s Harinam Van, driven by Premanjana Prabhu, which would carry the sound system and a few devotees leading the kirtan. 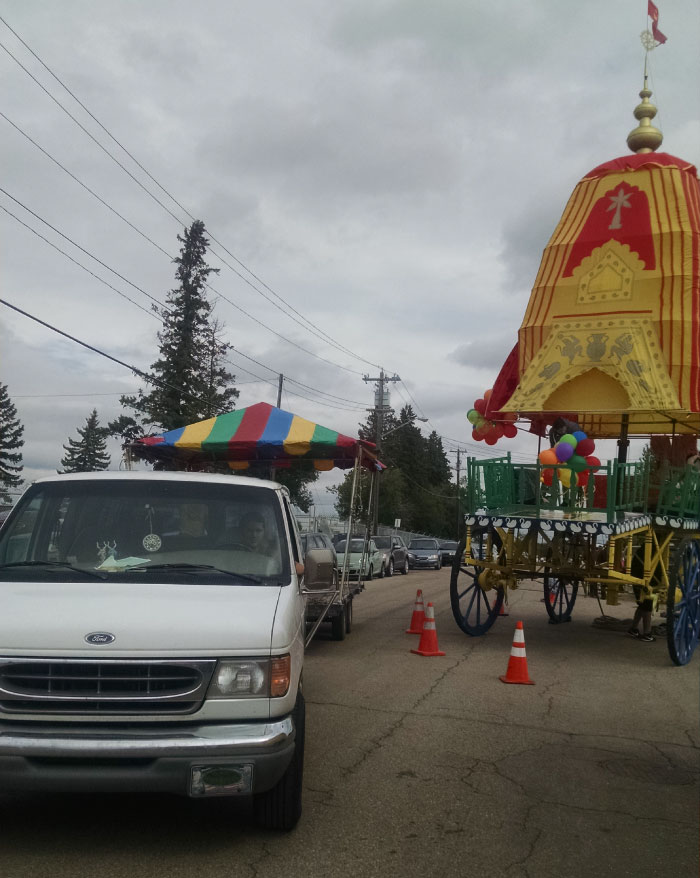 The parade was unique in that it stopped in front of a Hindu temple where all the members of that temple came out and joined in the kirtan and distributed prasadam. Hare Krishna. 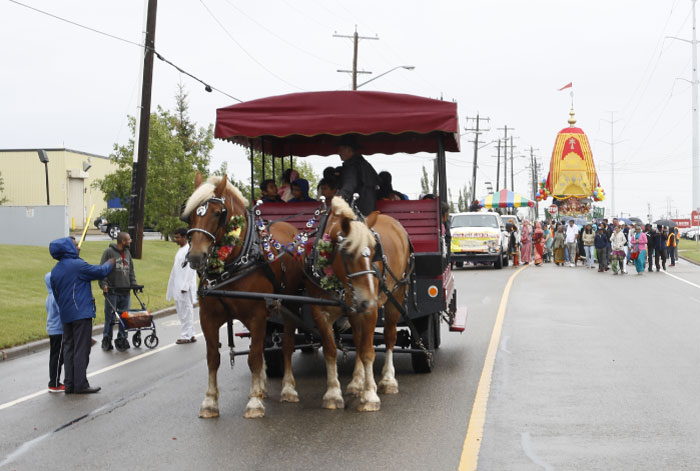 This year Bala Krishna Prabhu also arranged a horse cart—two giant Belgium horses pulling a first class cart that carried about 40 of the elderly devotees (above). 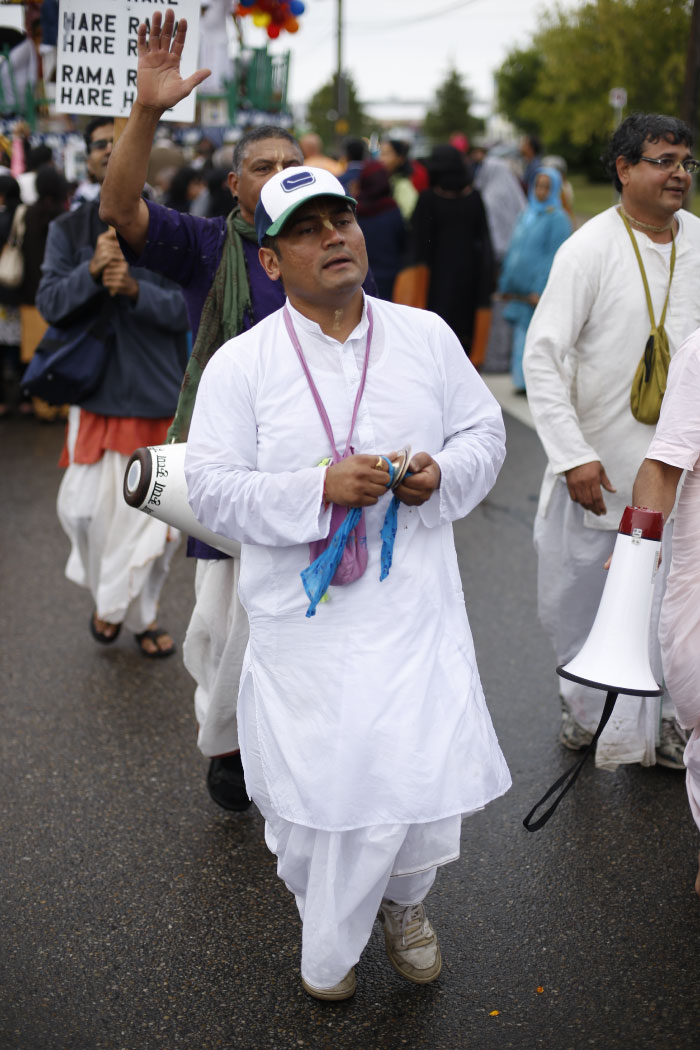 Even n the rain, everyone was blissful. Hare Krishna. 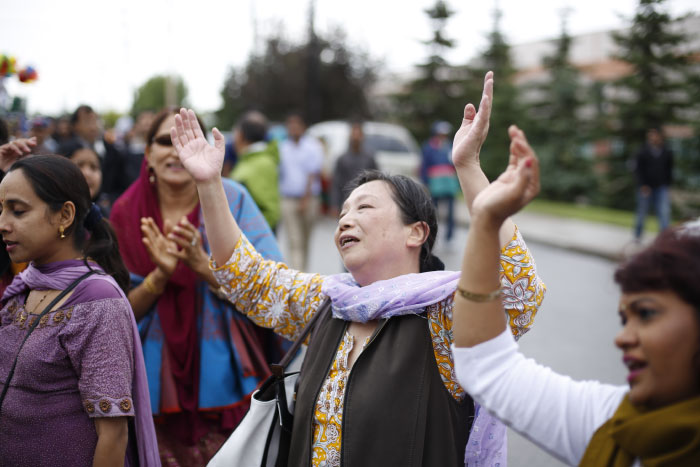 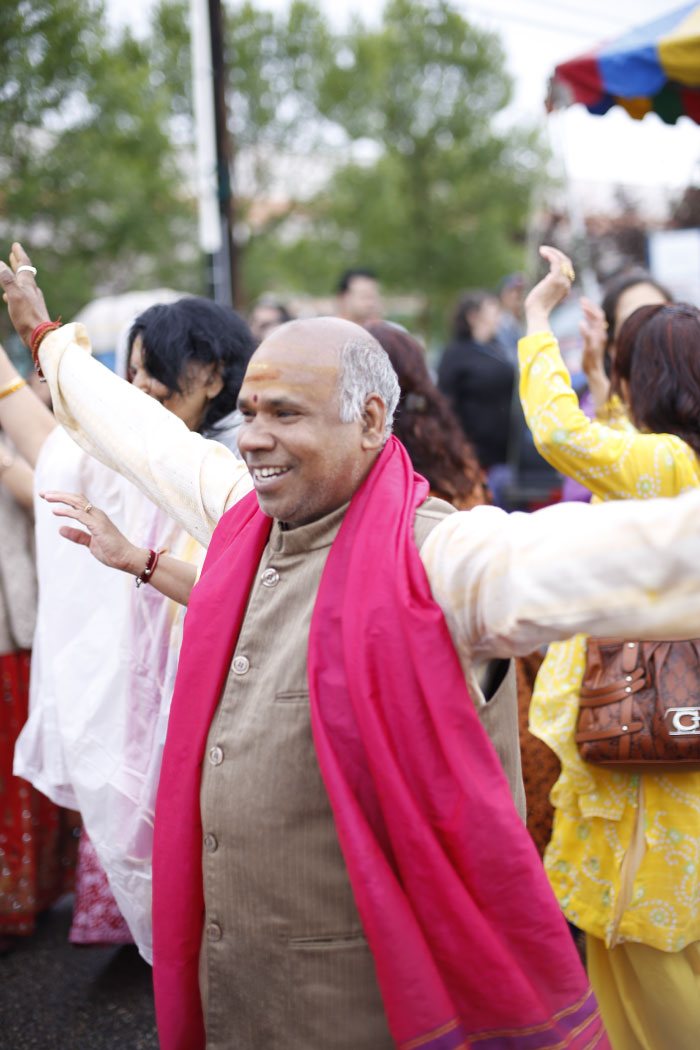 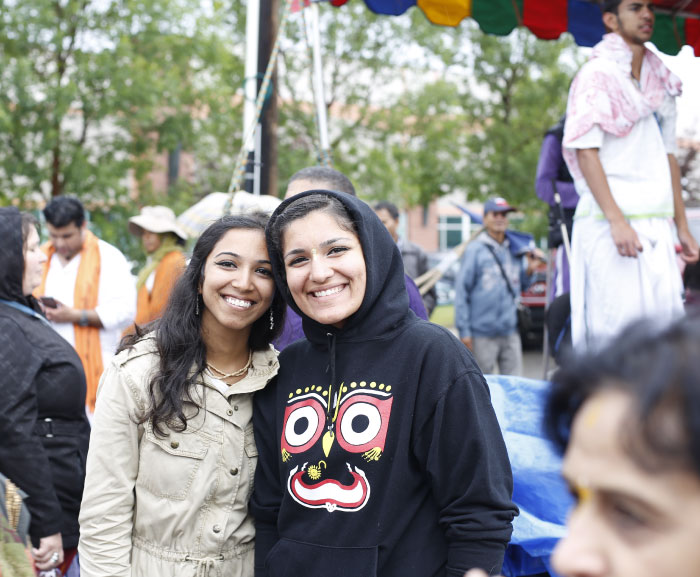 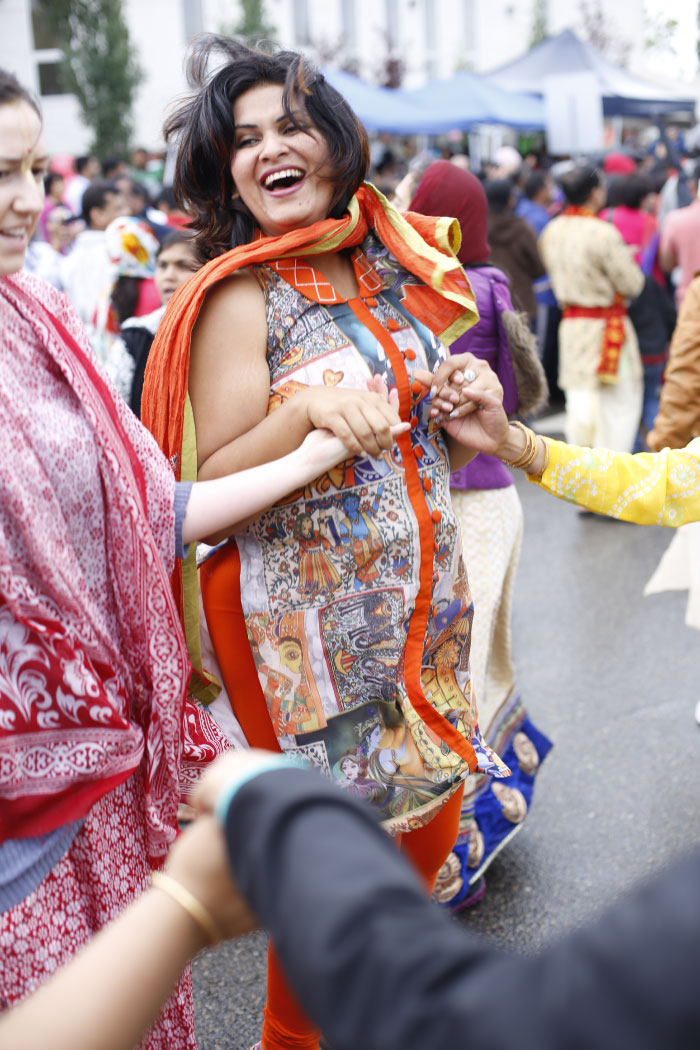 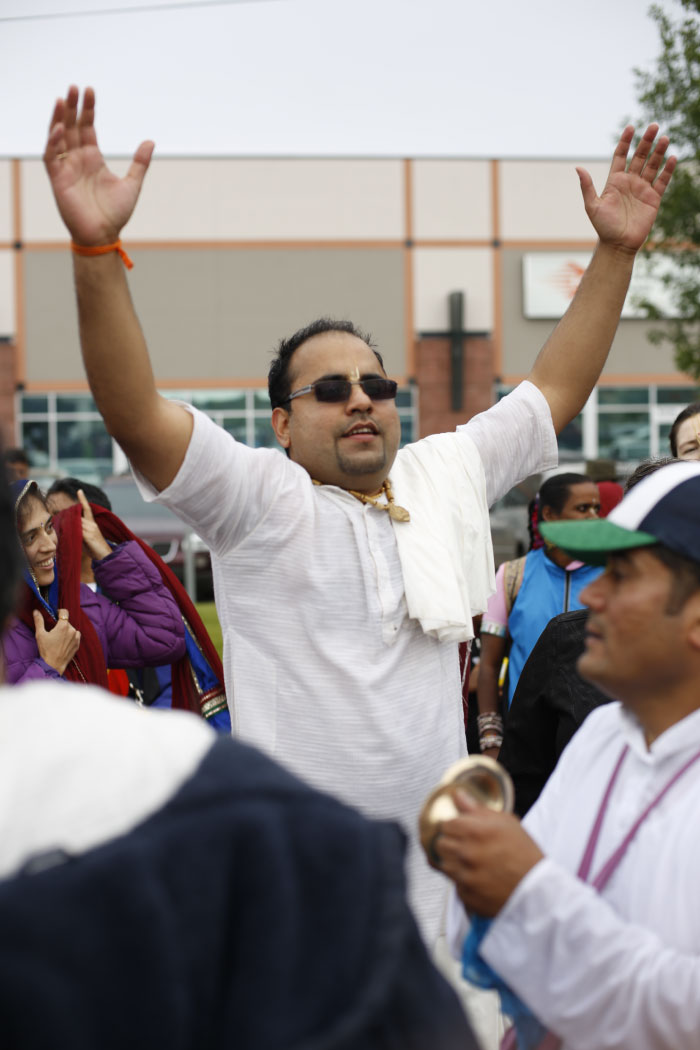 Yogindra Prabhu (above), along with all the other devotees in the Ratha-yatra was chanting Hare Krishna in ecstasy. Hare Krishna.
When the parade arrived at the park there were several tables where devotees were distributing Srila Prabhupada’s books. 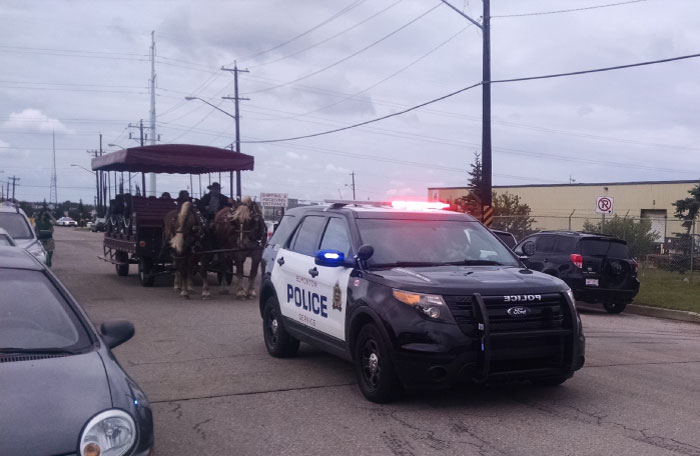 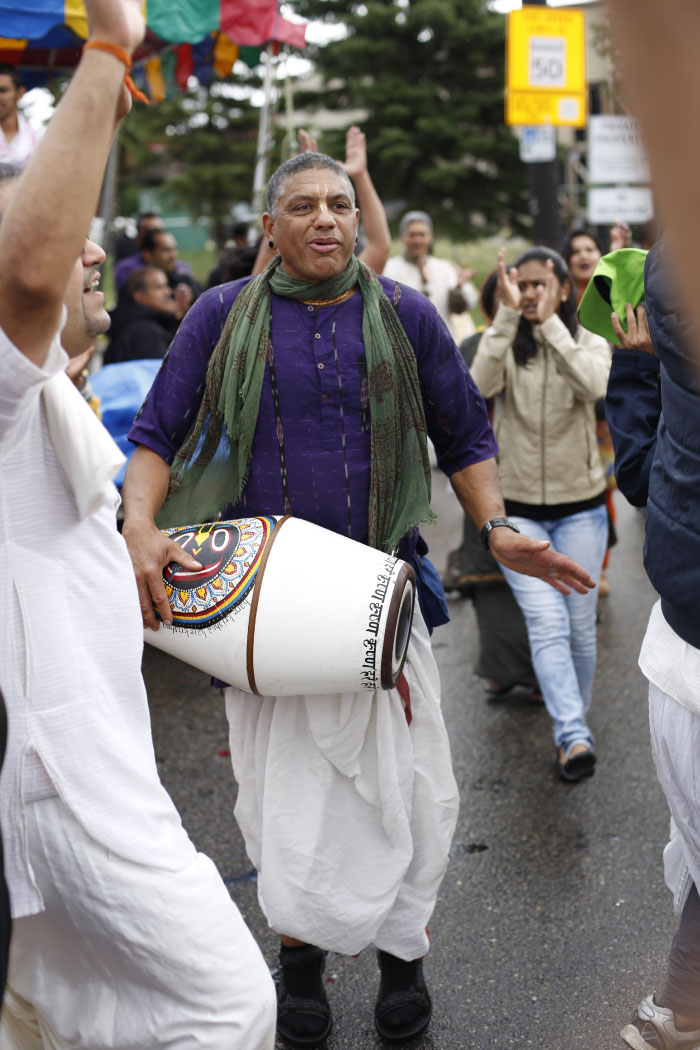 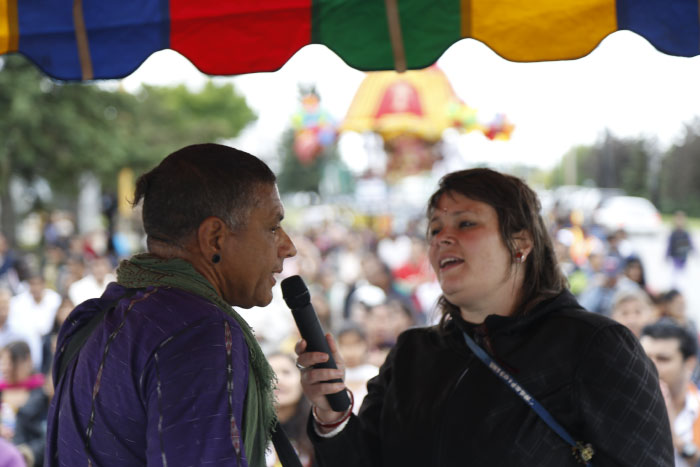 Kripanidhi Prabhu (above), who came all the way from Saranagati was distributing books as well as leading some of the best kirtans that day. Jaya Govinda Prabhu, from Vancouver, was busy at the “questions and answers” booth, and at least 10 of the Edmonton devotees were busy serving out Krishna prasadam to everyone who came. The crowd was a little smaller than the 2013 festival, but much smaller than anticipated—the morning rain certainly kept many people from attending. 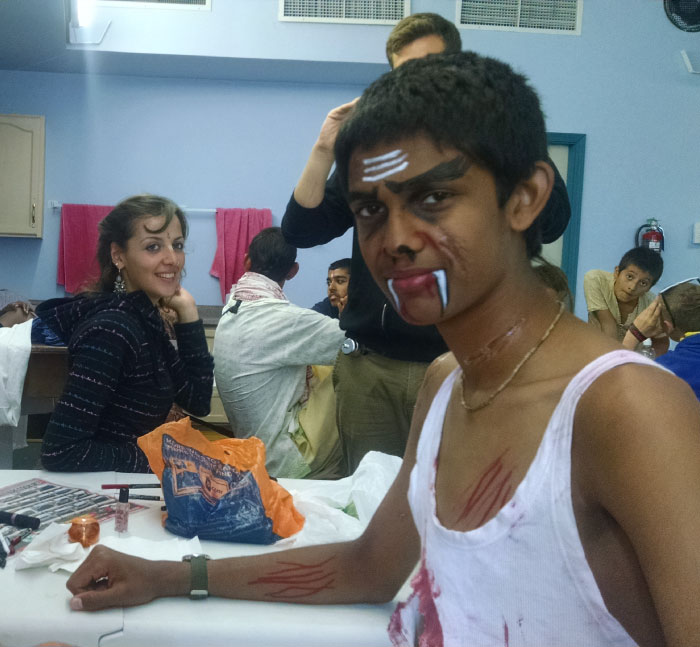 Niami from Prabhupada VIllage Village getting ready for his "demon role" in the Boy's Trip Drama.

The weather did finally improve, and the sun came out by 3:00 in the afternoon. Being fully satisfied with Krishna prasadam and seeing the stage program, guests started leaving the festival site. By 6:00 pm the FOI crew with all the Boys on the Boy’s Trip were spreading some of the tents, banners, and sidewalls out in the sun to dry. Everything was packed up and the doors were closed and locked by 9:30 pm.

While the packing was going on, Markendeya Prabhu, a Festival of India veteran crew member from 2013, was cooking dinner for everyone. The prasadam was great, everyone was satisfied. 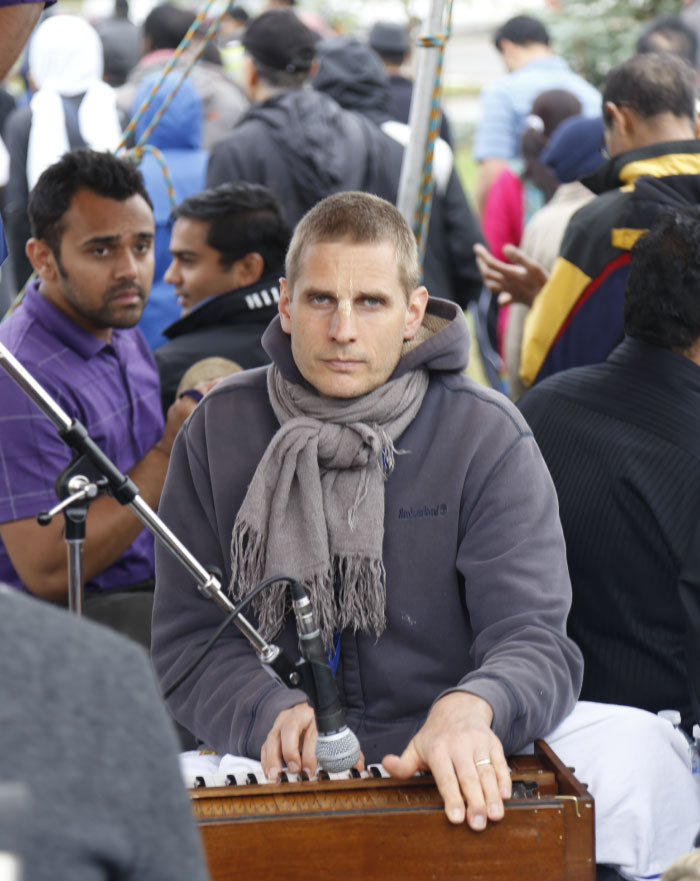 Then Manorama Prabhu (above), who runs the Hare Krishna Youth Ministry, jumped into the kitchen with a few of the boys from the Boy’s Trip to clean it. Every devotee has heard that a Brahmana, or a devotee always always leave a place cleaner then he finds it, and that is very true and exemplified by Manorama Prabhu and the Youth ministry. They were still in the kitchen cleaning at 11:30 pm.
Being as late as it was, we decided to spend the night in Edmonton and start the drive to LA the following morning. On Sunday morning Phani Bhusan Prabhu, who has traveled with Festival of India since 1992, appeared in the kitchen at about 6:00 am and started cooking breakfast for the crew, he was done by 7:25 so the boga was offered to Sri Sri Radha Govindaji. The crew woke, bathed, took prasadam and we were on the way, driving south by 8:00 am. We drove non-stop to Calgary, where we arrived just in time to catch a the tail end of the Sunday program, which was Dattatreya Prabhu, one of the Boy’s Trip organizers, dovetailing his magic, by giving Krishna consciousness to the Sunday Feast attendees with his “tricks” Hare Krishna. The magic is in the chanting. Hare Krishna.

After the Sunday feast we all got back in the vehicles and started driving south towards Los Angeles. We made it about 61 miles, just south of a little town—Nanton, Alberta, when Govinda, who was driving the Pickup truck called on the radio and said “Hare Krishna Hare Krishna a tire just exploded Hare Krishna Hare Krishna”. We pulled over to find one tire completely blown out-totally gone. It took about an hour and half to locate someone who does road service. 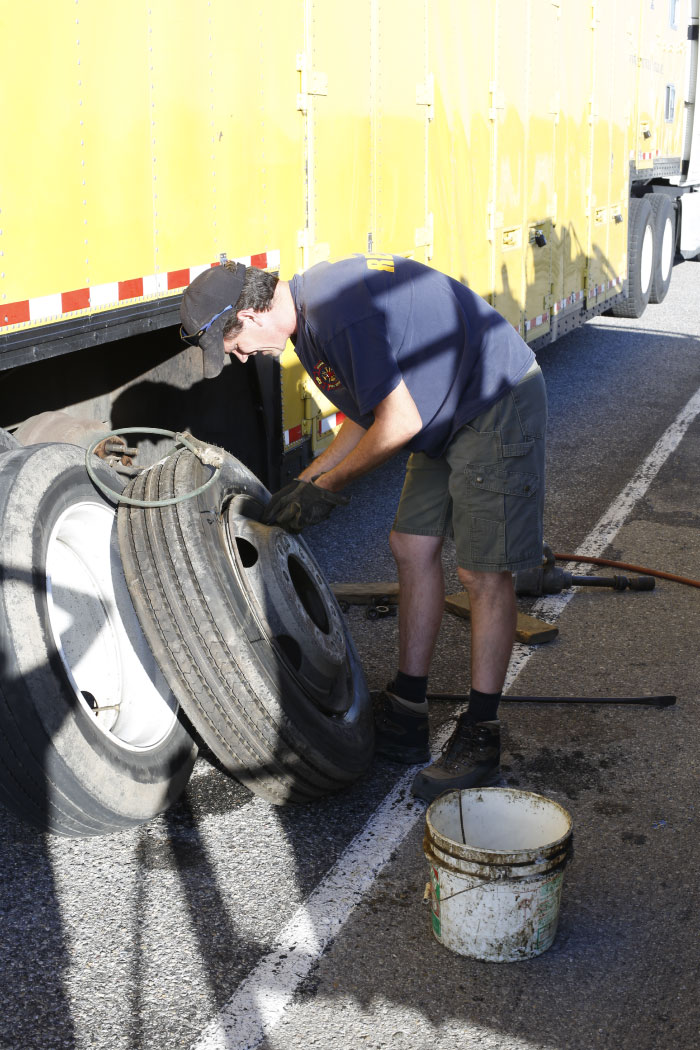 Finally we found someone, when he arrived and dismounted the tire, he also found a small hole in another tire which fortunately, was repairable. That one tire blow-out and breakdown cost us just $876, Krishna’s mercy—it could have been worse. At least all of the devotees are safe, still chanting Hare Krishna, filled with Krishna prasadam and ready for the next festival. Hare Krishna. 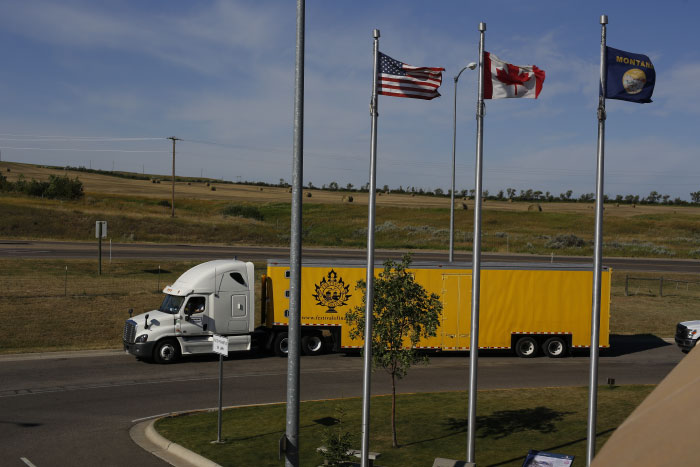 Festival of India's Truck just south of the Canadian/U.S.A. border in Sweetgrass, Montana. 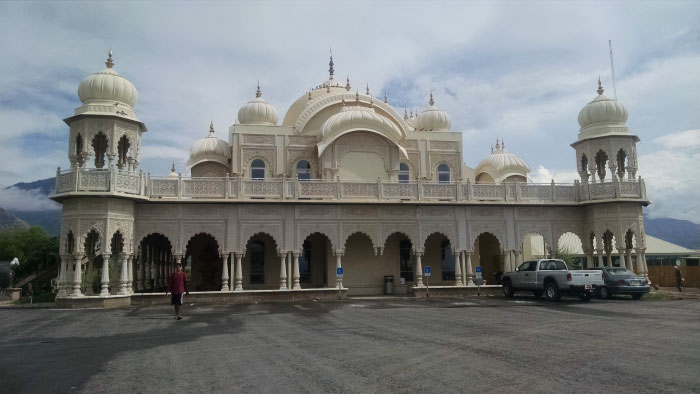 The next stop was at the Spanish Fork temple (above) designed and built by M. Bhai Bhavi d.d. and Caru Prabhu, where we were greeted by Rama the Llama, below is Markendeya Prabhu after offering obeisances to Rama. 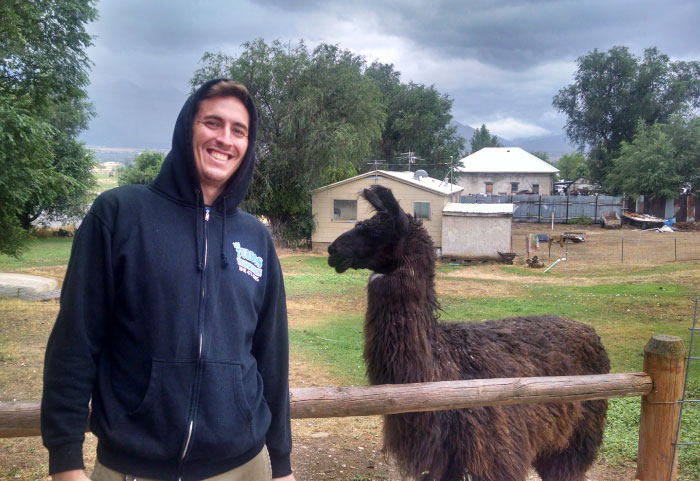 We hope to see you on Venice Beach at the Los Angeles Ratha-yatra in a few days, Hare Krishna…….