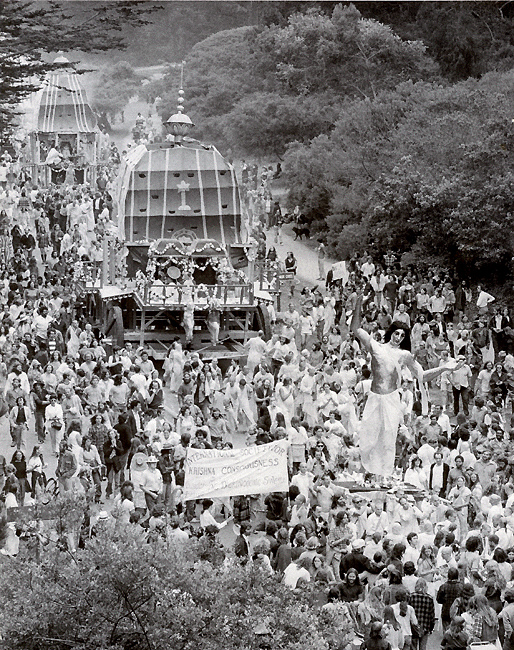 This fascinating group of images documents the presence of the Hare Krsna's in San Francisco from the late 1960's to the mid-1970's. It includes photos of the Ratha Yatra, kirtan parties in the Golden Gate park prior to Ratha Yatra festivals, and images of the original Radha Damodar Party.

In 2005, the Sun ran a feature article entitled, "Ratha Yatra's Appearance in the West", in which we shared images of some original Ratha Yatra posters we had collected in our archives. We described Srila Prabhupada's establishment of the first western Ratha Yatra, in 1967:

By the mercy of the Lord's pure devotee, the West was first benedicted by the appearance of Ratha Yatra in San Francisco in 1967. His Divine Grace A.C. Bhaktivedanta Swami Srila Prabhupada organized his followers to arrange for a chariot that would deliver Their Lordships Jagannath, Baladev and Subhadra out onto the streets of San Francisco. Westerners got their first glimpse of these divine personalities by Srila Prabhupada's direct mercy. Since that time, Ratha Yatras have manifested in cities, towns and villages around the world, continuing what is perhaps the oldest continuously celebrated festival on the planet.

"Anyway, the devotees are coming here, and the Rathayatra Festival was performed with great pomp. More than 500 people followed the procession to the beach, and there were about two dozen cars. They distributed thousands of chapaties, and at last Shri Jagannatha, Subhadra, and Baladev kindly came here in our house and will stay here for one week and then return."

In a photograph of the 1969 Ratha Yatra, we see Srila Prabhupada joined by Jayananda, Tamal Krishna, Hansadutta, and other devotees. 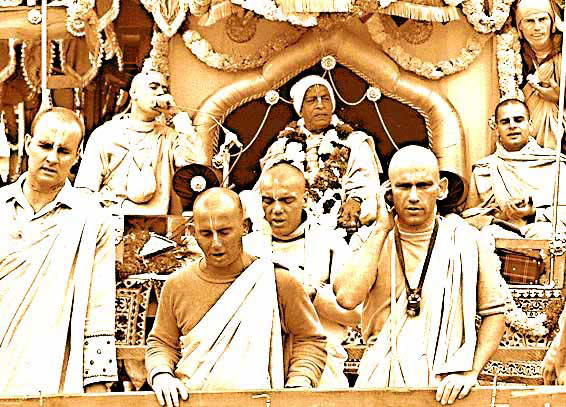 Enjoying the memories sparked by the San Francisco Examiner photos, Rocana dasa shared a few of his experiences from the early days in San Francisco:

"The San Francisco Ratha Yatra was the first place in the U.S. that a Ratha Yatra was held by Srila Prabhupada. This was primarily due to the efforts of Jayananda dasa, who very much pleased Srila Prabhupada by working with the devotees to organize the festival. San Francisco in those days was the place where the smaller temples like Vancouver and Portland would visit to experience a taste of the growing new world of Krsna consciousness. During Ratha Yatra season, Vancouver and Portland would almost shut their temples down, and everybody would pile into vans and travel down to the San Francisco event.

While I was not fortunate enough to attend the very early Ratha Yatras, I did get to enjoy a trip to the Berkeley Gaura Purnima festival in 1971, as well as the San Francisco Ratha Yatra Srila Prabhupada attended in 1974.

The Vancouver temple had just bought a brand new Ford van, and Mahatma decided that he was going to pack everybody - 24 people - into this van. And they didn't have stretch vans back then. The traveling crowd included women and children, and my wife and daughter were among them. You can't image how full this van was. In fact, by the time we reached Portland they decided to have the women and children go the rest of the way by bus. Fortunately I was one of the few drivers, so I had a seat to myself and didn't suffer as much as everyone else. I remember we even had someone sitting on the engine compartment between the two front seats, looking backwards. As the hours went on the devotees started falling asleep, and we would stack them like cordwood in the back.

We finally reached San Francisco, which was a 24-hour drive, and we stayed there for at least two weeks. For Gaura Purnima, Jayananda had organized a big festival going right down the main street at Berkeley campus. Locana dasa, who was the Temple President of Portland at the time and was a fantastic artist, had constructed a set of beautiful, large statue/murtis of Sri Sri Gaura Nitai that stood some 20 feet high. Lord Caitanya can be seen in the Ratha Yatra photo at the top of this page.

The Berkeley temple at that time was a large, older house very close to the university (there was no San Francisco temple at that time). For us Canadians, the weather was great. I can remember there were so many people in the brahmacari asrama, and of course at mangal arotik, that we couldn't believe the numbers. Guru-krpa was like Sergeant Rock of 'F Troop'. He would stand outside the shower and one by one, push each of the men into the cold shower. He'd hold them in there for 10 seconds, then pull them out. Then every day he'd organize us all to go door-to-door in teams all throughout Berkeley, handing out pamphlets and talking to people about the festival.

On the day of the Gaura Purnima festival, unfortunately, the weather turned bad. Although there was no rain for the parade and the kirtan, right afterwards it started raining. So Jayananda invited a huge number of people to the temple. There were so many people jammed into the temple all parts were overflowing, from the brahmacari rooms on down. Everyone was packed out with prasadam and kirtans. It was really a wonderful experience.

And as soon as the rain stopped everyone overflowed out of the temple and into the yards. We had cooked so much prasadam! All the devotees in those days, including myself, were new, but we were already prasadam hounds. I can remember one devotee, the day after the festival, sitting in the back yard just eating and eating, until he fell over unconscious. We practically had to pump his stomach.

Reluctantly, after a few weeks we had to again pack the van full of people and drive all the way back to Vancouver. Not surprisingly, we broke the springs on the van, but fortunately it was new, so we all made it home.

This marked the beginning of improved conditions and added enthusiasm at the Vancouver temple, because we had all enjoyed this enlivening Krsna conscious experience. The Temple Commander in Vancouver at the time was Sridhar, who later became Sridhar Swami. Only Mahatma and Sridhar were initiated at the time. My daughter was only 8 months old, and Bahudak had some very young children, as well. 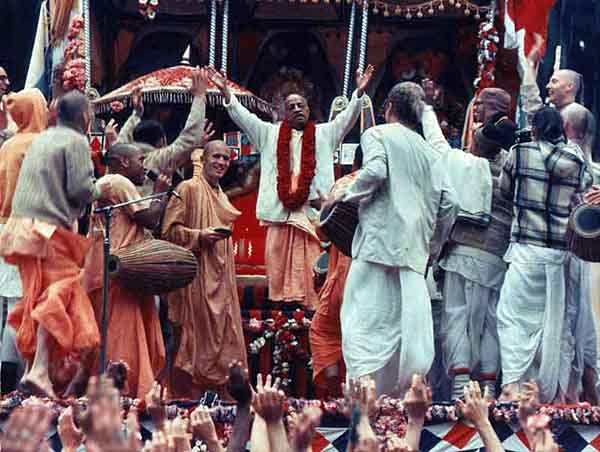 I have wonderful memories of attending the San Francisco Ratha Yatra that Srila Prabhupada attended in 1974. In the well-known picture above we see Bahudak, who led a lot of the kirtans along the way at this Ratha Yatra. He was in front of the cart that Srila Prabhupada was standing on. The photo above is not of the Ratha Cart, but of the festival stage after the parade.

Bahudak was the Temple President of Vancouver in 1974. For us Canadians, the Ratha Yatra was always extremely memorable because we were somewhat isolated compared to those living in California, where the temples were much bigger. They would have programs together throughout the year and were used to large crowds of devotees, but for us northerners it was an incomparable event.

By this time the temple had moved from Berkeley to San Francisco. We arrived and were greeted by Jayananda, who went out of his way to give us whatever facility he had available. I can picture it almost like it happened yesterday. During the Ratha Yatra Srila Prabhupada was so effulgent and ecstatic! He'd get up and raise his hands, just as you see in the picture, and the devotees would go wild. There were so many people at the Ratha Yatra. We had virtually emptied Haight-Asbury out, and a lot of 'stray people' were in attendance.

I remember Srila Prabhupada arriving in a nice car, and the kirtan went wild to greet him. Then Srila Prabhupada got up on the cart. After the Ratha Yatra he gave a very nice lecture. The devotees had arranged good sound systems, and the program was basically Srila Prabhupada and kirtans. I remember that he was playing a gong and he was very well received by the crowd. There's no question that his mood was inconceivably ecstatic, although nobody in those days had any idea of just how advanced Srila Prabhupada was. Regardless, his mood was totally infectious. I don't think you could ever replace that mood with anything.

San Francisco soon gained the name 'New Jagannatha Puri'. The Jagannatha Deities there were bigger than anywhere else. I can't remember the details of who carved them, but perhaps one of the readers can fill us in on the details. It might have been Nara Narayana's brother. They were uniquely beautiful in the way that they were carved and painted. And of course, they were decorated in very ornate outfits. When they were put up on the carts it was just amazing.

Of course, in those days the carts were hand made, and it took the devotees months to make them. They didn't have any fancy mechanisms for braking… you had to brake them from behind by people holding the ropes. Arranging to have the canopies come down as you passed under low-lying wires was a major engineering accomplishment in those days.

There was little or no attendance from the Indian community at the time. It was primarily westerners, and we were all learning together. In hindsight, we can say that only Krsna could have orchestrated such an event. It was obviously put on by Krsna for the pleasure of the pure devotee. Considering the people that Srila Prabhupada had to work with, there was obviously an inconceivable amount of mercy at work."

Following are a few more of the San Francisco Examiner photographs. Click on each image for a larger format version. We would very much love to hear from devotees who can recognize the various personalities in these images. Please let us know and we'll post an annotated copy with the updated names. 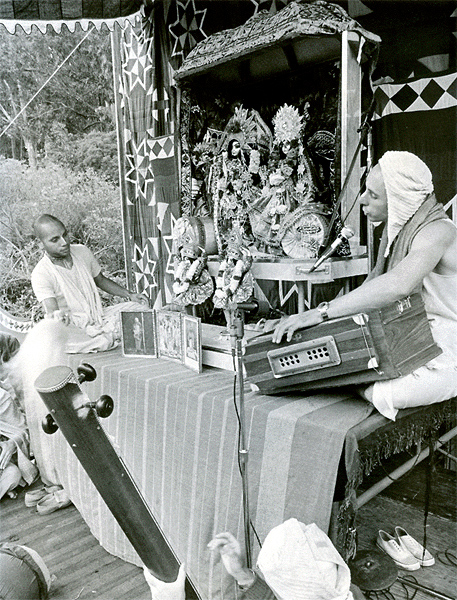 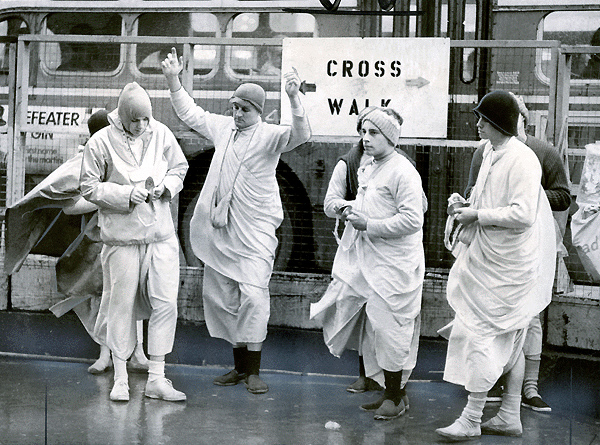 Examiner Byline: "CHANTING… IT IS OUR LIFE AND OUR SOUL 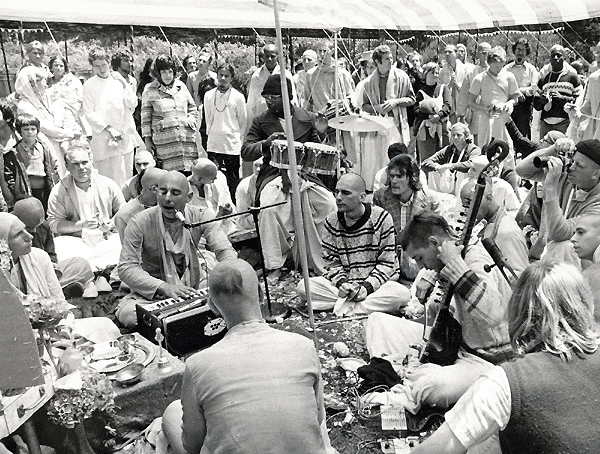 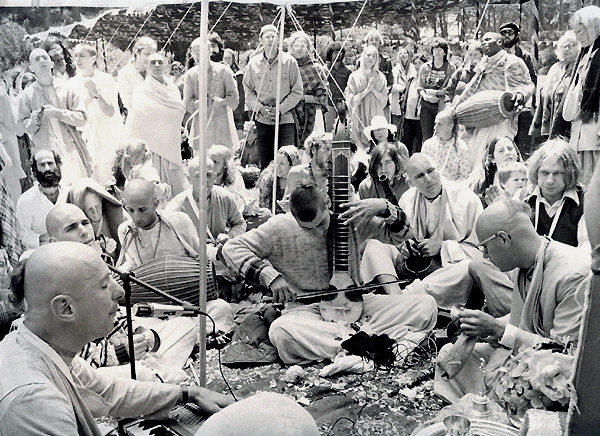