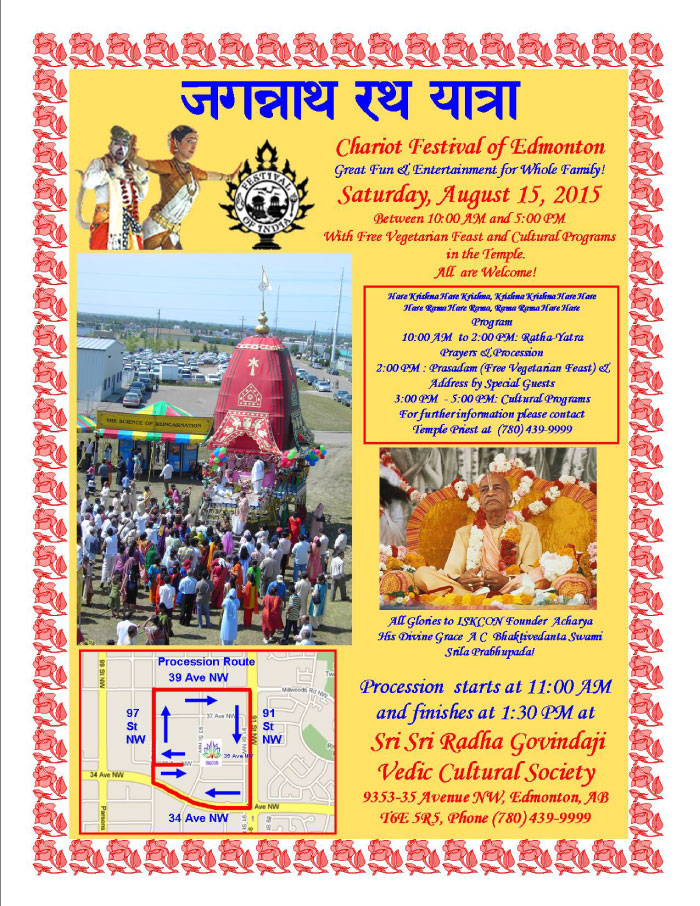 Inspired by, and, under the Direction of, ISKCON's Founder Acarya A.C. Bhaktivedanta Swami Prabhupada 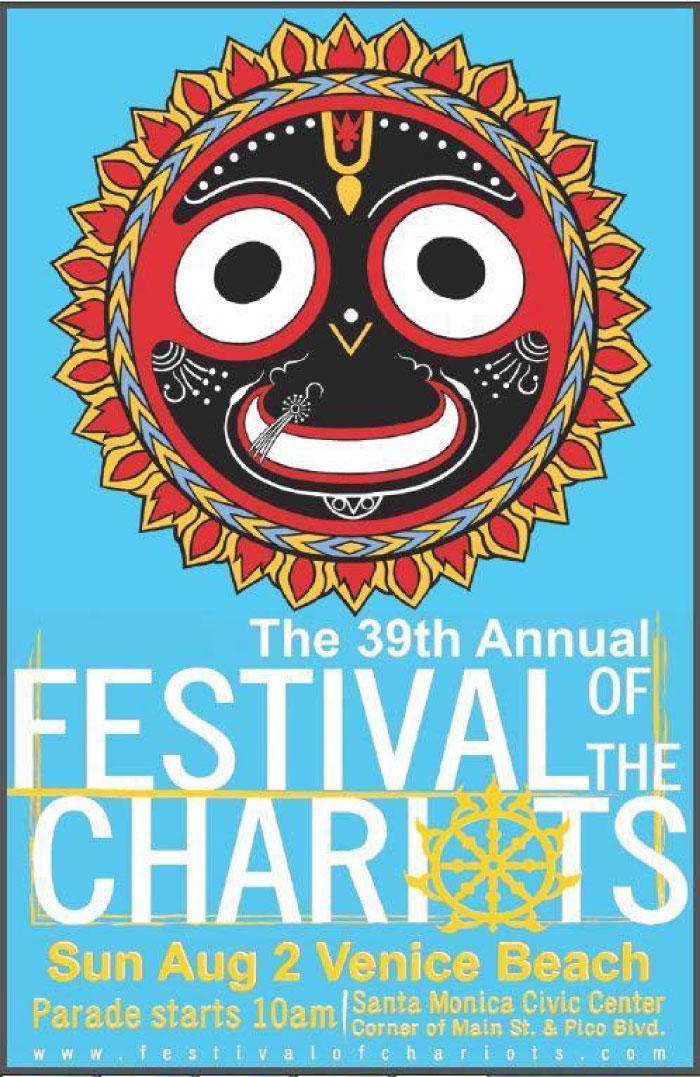 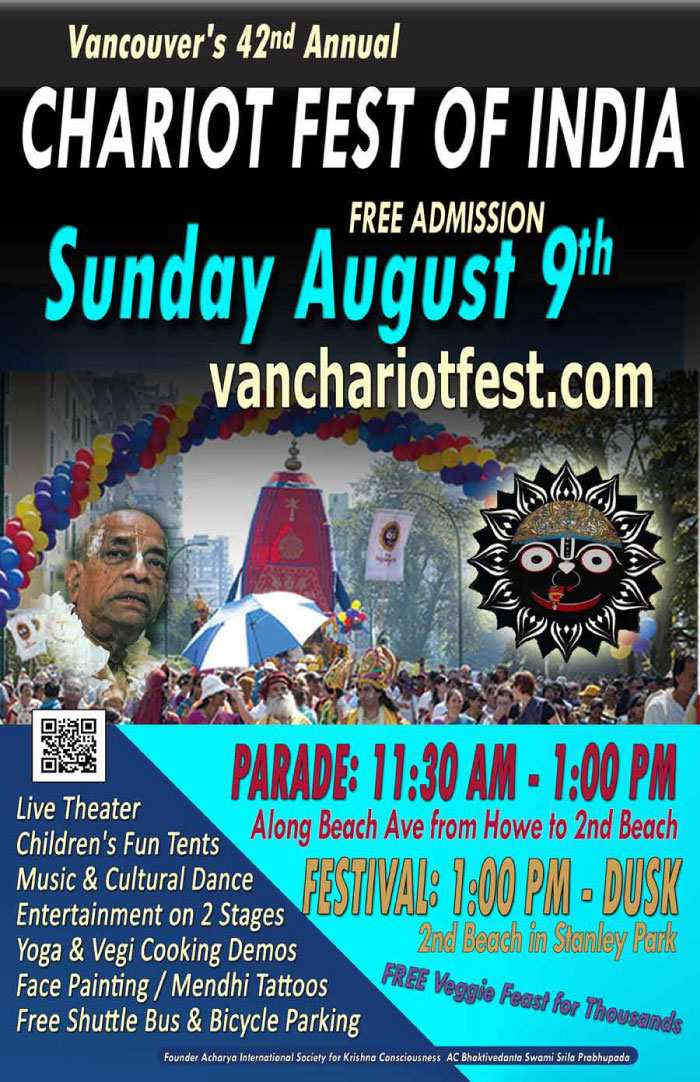 With the help of more than 50 youth on the Krishna Culture Your Tour, directed by Manorama Prabhu and his wife M. Jaya Sri Radhe d.d., packing up the festival site in Toronto went faster than ever. After riding the ferry to the main city, we immediately started driving towards Thunder Bay.

With the help of more than 50 youth on the Krishna Culture Your Tour, directed by Manorama Prabhu and his wfe M. Jara Sri Radhe d.d., packing up the festival site in Toronto went faster than ever. After riding the ferry to the main city, we immediately started driving towards Thunder Bay.
As usual, we had some exciting obstacles which made the trip take 10 hours longer than we planned on. We made a brief stop at SerpeRiver, where the devotees had an opportunity to bathe in a pristine clean, and very chilly river. The we continued driving all night Monday, then we arrived at the Marina Park at about 8:30 am.

As soon as we parked, the doors of the trailer were opened and the setup began. By 3:00 pm everyting was complete and the Ratha-yatra was getting ready to start... 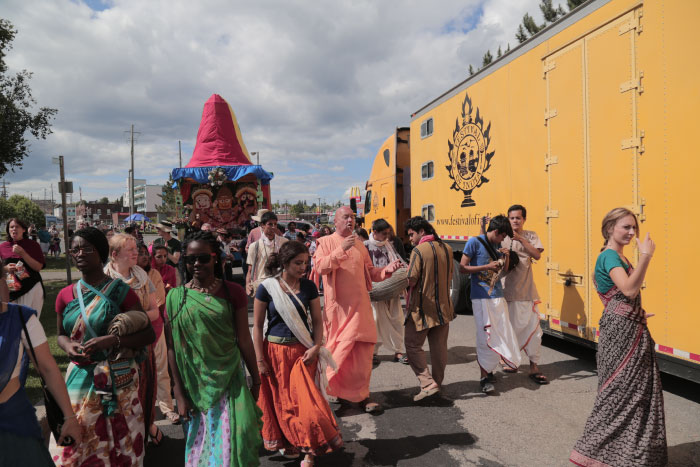 PremaKishor Prabhu has been organizing programs with Manoram Prabhu and Hare Krishna Youth Ministry for many years. At first it was a rented hall with a drama, kirtan and prasadam distribution. Now there is a Ratha-yatra that goes around the park, that ends at a Festival of India that's attended by 2,500 or more local Canadians. Keep up the great work Premakishor Prabhu, we pray more and more devotees will follow in your footsteps and bring Krishna consciousness to their cities--all over Canada, North America... 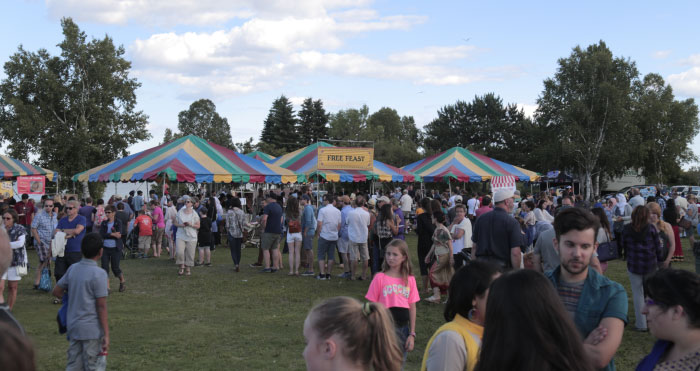 Who would have imagined tht so many people woud have shown up on a weekday? ATleast 2,500 people were there, attentively watching the stage program, and reading all festival of India's exhibts that give the readers an warm and gentle introduction to Srila Prabhupada's books. The crowd in Thunder Bay was 98 percent white Canadians--young and old from all wolks of life. They were truly appreciating the kirtans, other stage presentations, and especially the Krishna prasadam. 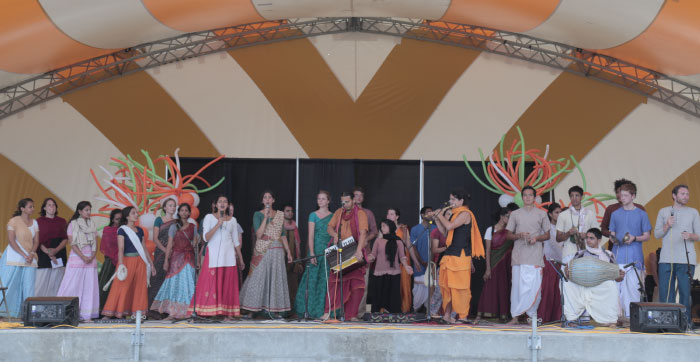 So many people showed up. 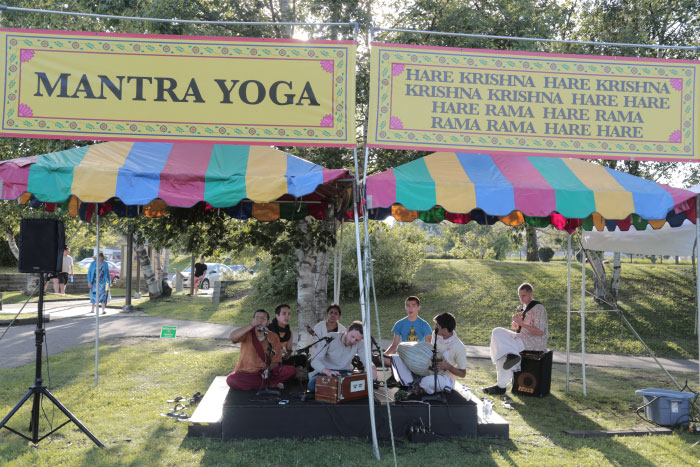 A new addition to the Thunder Bay Festival--The Mantra Yoga Booth. It consisted of two 10' x 10' tents and 5 to 7 devotees chanting Hare Krishna all day. 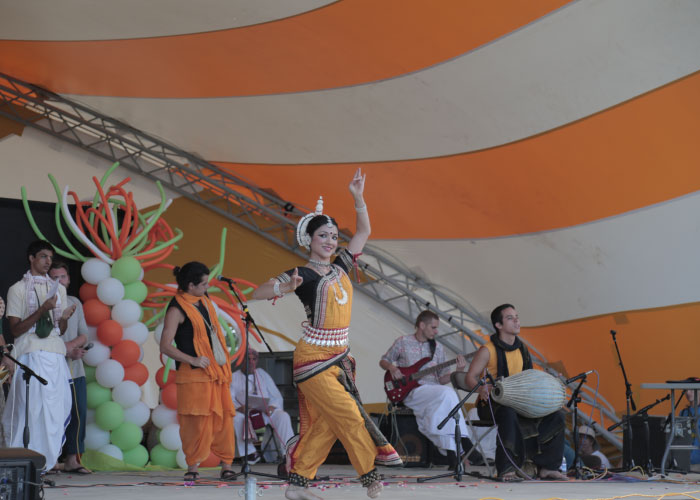 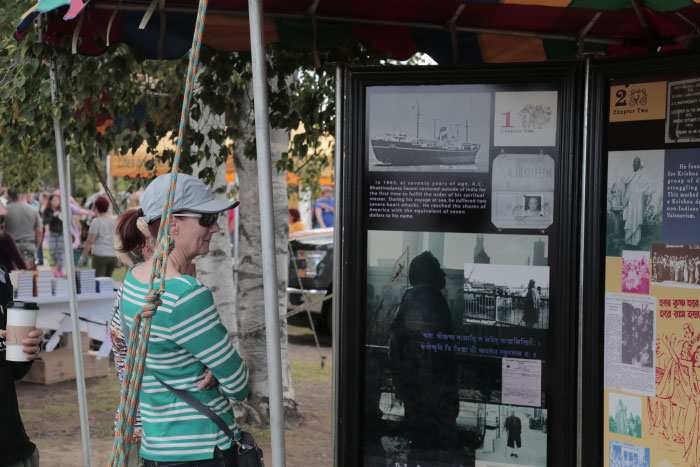 So many guests were reading the exhibits, above one woman reading the "Who Is Prabhupada" Exhibit. She left with one of Srila Prabhupada's books, and fully satisfied after hearing the Maha-mantra and tasting the Krishna Prasadam that was being distributed.

At about 9:00 pm the crowds started leaving and we started packing up. By 1:00 am the service was complete. We all took rest, got up 6:30 am, bathed, and started driving driving towards Calgary. We're on the road now..Hope to see you in Calgary....Hare Krishna 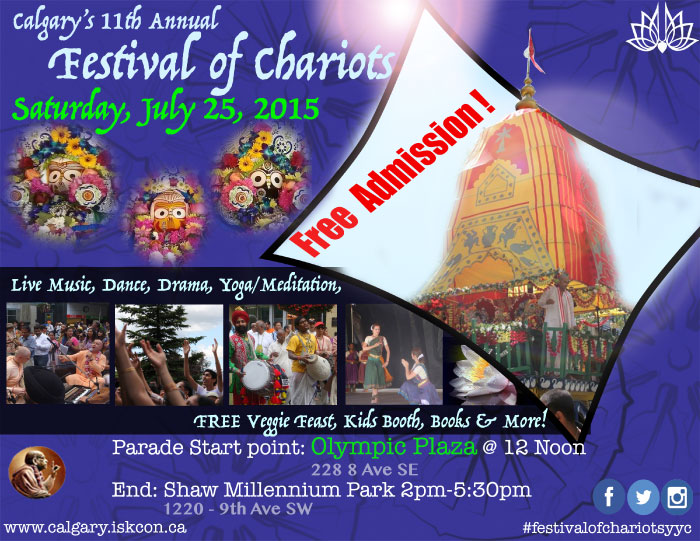 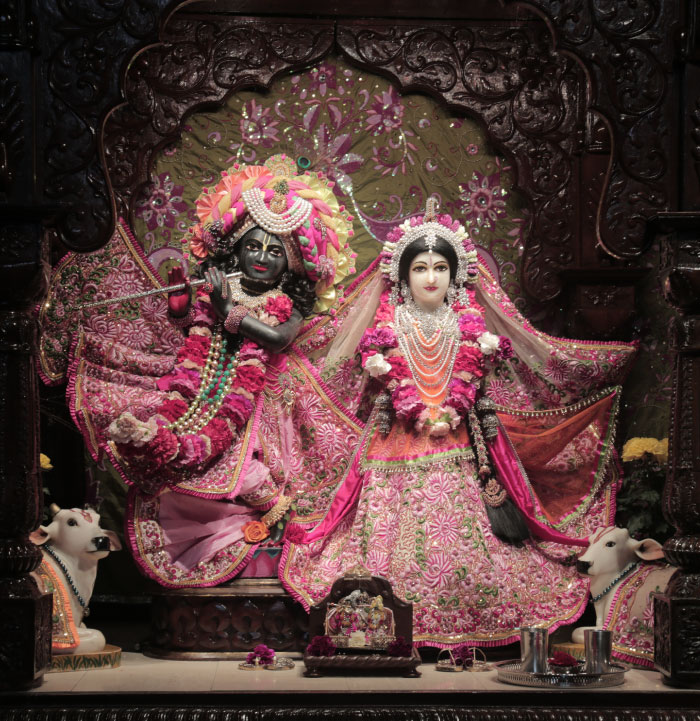 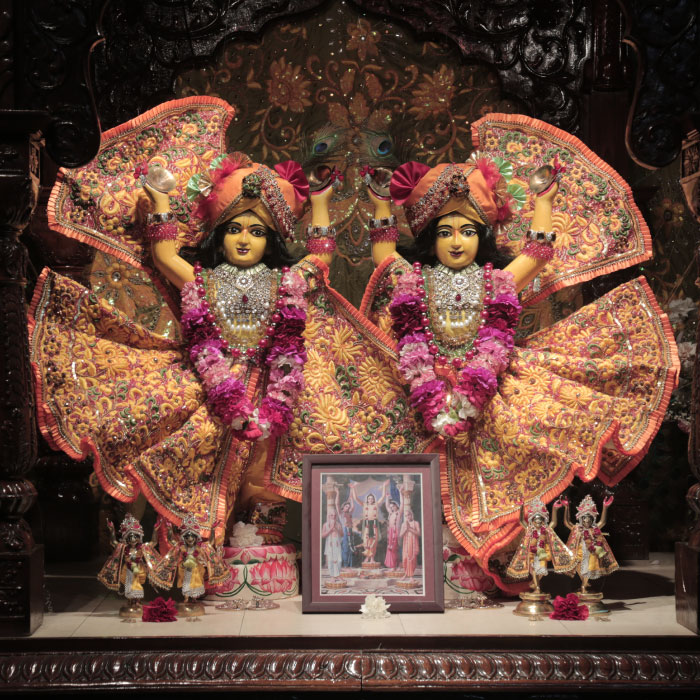 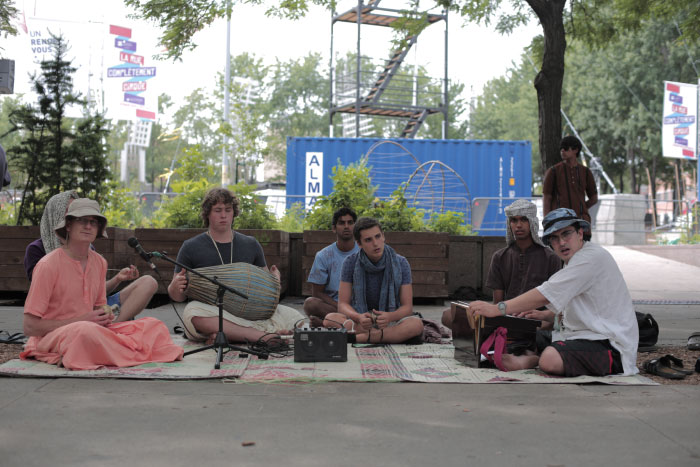 This year we arrived in Montreal about two weeks before the Ratha-yatra. Festival of India's crew was participating in Harinam and other services at the Montreal temple. Hare Krishna. 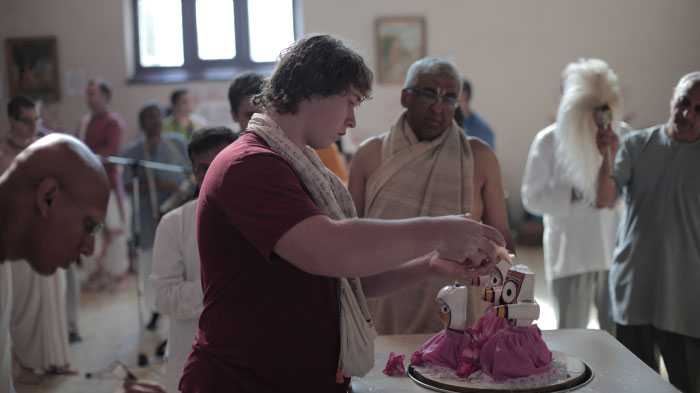 Ishan bathing Lord Jagannatha at the The Lord's Snana Yatra Festival in the Montreal temple. 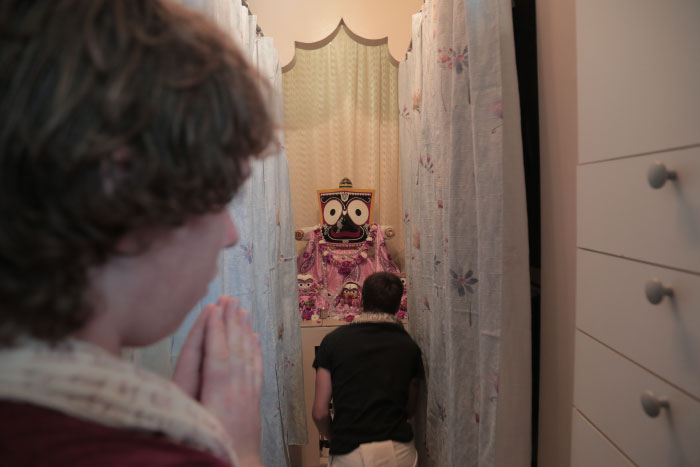 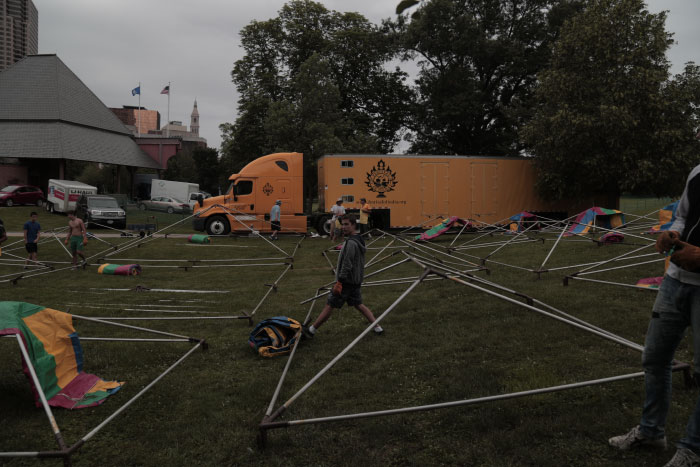 There was another festival going on in the Park the day before Ratha-yatra, so FOI's crew set up all the tents and banners behind the main stage pavillion in the park. The morning of the festival we moved all the tents into place, and the transcendental show began. Hare Krishna. 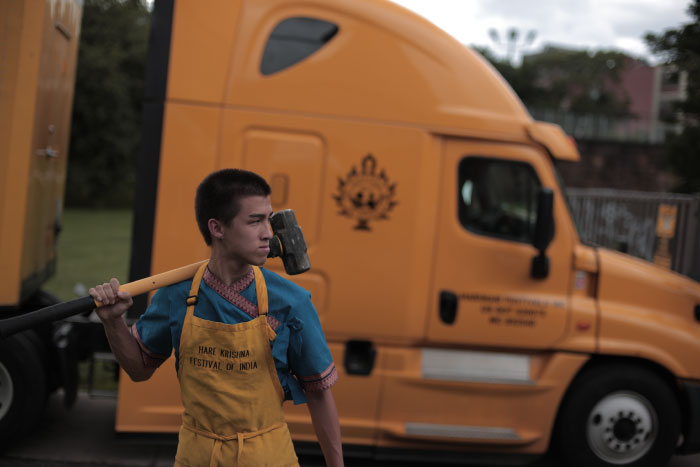 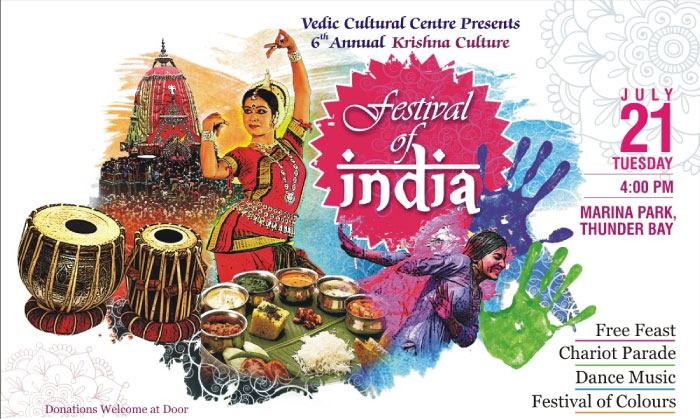 Inspired by, and under the direction of, ISKCON's Founder Acarya A.C. Bhaktivedanta Swami Prabhupada